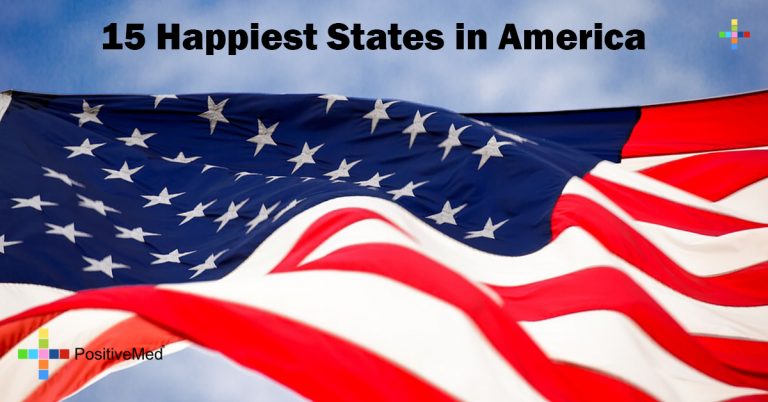 15 Happiest States in America
By PositiveMed-Team
Edited By: Stephanie Dawson

The beautiful views provided by the Rocky Mountains of Colorado make it a happy place to live. Apart from the natural beauty Colorado is one of the highest life expectancy places in America, about 80 years, which makes it even more special. Some of the best beers available in the United States are found in Colorado.

Minnesota is a state with cold weather but still has many reasons for being a happy place to live. It has many lakes that add to its scenic beauty along with solid sports teams and the Mall of America which make it a happy state.

Utah is a state with peace and tranquillity along with major city action all rolled into one. Utah has a median household income of $55,869 and a 23.9% obesity rate making it one of the happiest 5 states.

Residents of Vermont display healthier behaviors than any other state. This state has the lowest poverty rates in the country and has good access to the most basic needs.

Montana is home to the most educated work force in the country. The unemployment levels are low and there is a higher percentage of adults with high school degrees. This state offers a perfect blend of rural life and city thrills.

The residents of this state are physically fit and rarely miss work due to physical ailments. They have been reported as well rested and experience lower workplace stress in comparison to other states.

New Hampshire ranks among the top states in terms of median household income which is around $62,647. It has terrific scenic beauty and the residents have good access to basic amenities. The low poverty rate of 8% makes this state more special.

Iowa is the 3rd best state in America in terms of access to basic necessities. People of Iowa are the happiest people at the workplace and report a healthy work environment. In a study it was found that bosses in Iowa give their subordinates better treatment than bosses in other states.

This state has the 5th highest median household income which is approx $62, 859 and the second lowest obesity rate at 21%. Residents of this state report the highest health insurance coverage along with easy access to housing needs.

This state is home to the biggest financial institutions around the globe making it the financial center of the country. The city is extremely lively and people say it never sleeps. Places such as Niagara Falls add to its charm.

When people think of Washington often the first thing that comes to mind is rain. Along with pleasant weather Washington is one of the sea food centers in the country along with great sports teams making it an extremely happy state.

This state has much to offer its residents, from a chance to bump into a celebrity to authentic Mexican cuisine. The other attractions that make it more happy are the sunny days, Los Angeles, Disneyland, and Hollywood.

The state of Maryland ranks number one in terms of median household income which is more than $70,000. With less than 10% people below the poverty line this state is no doubt a paradise for someone who equates happiness with money.

Virginia is one of the richest states in America with less than 7% people living below poverty line. More than 87% of its residents have high school diplomas and display positive attitudes.