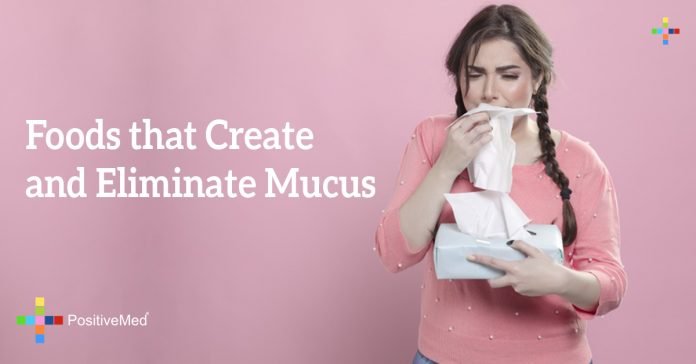 Foods that Create and Eliminate Mucus
By Positivemed-Team
Edited By: Stephanie Dawson

• Dairy – Dairy products like milk, sour cream, yogurt, cheese, and ice cream are the primary source of mucus caused by food. Thick irritating phlegm is produced in your throat by these types of foods. It might also make the existing mucus thicker and harder. Use caution if you have milk allergies as milk is not easily digested. Lactose intolerance can make milk drinking an unpleasant experience.

• Nuts and Grains – The problem is usually with oily nuts, and there should not be any problem if you are having dry roasted nuts. Mucus can be caused by processed wheat flour. This means that products like bread, pasta, and processed cereal should be decreased while consumption of barley, corn, millet, and quinoa should be increased.

• Beverages – One does not consider beverages when they think of mucus. However, a few common drinks like black tea, coffee, chocolate drinks, milkshakes, alcohol, and sugary soft drinks can cause mucus build up.

• Olive Oil – Unsaturated heart-healthy fat can be obtained by the use of olive oil. Olive oil produces effects which often reduce bronchitis symptoms. Try to swap saturated fat sources in your diet like butter and margarine with olive oil if you are already prone to mucus. Consumption of olive oil with nutritious foods like leafy green salads and whole grain is even more useful.

• Warm Fluids – Warm fluids is one soothing dietary option. Sipping fluids throughout the day helps the body to flush toxins and promote hydration which helps you to heal faster. Tea, broth, and chicken soup can help loosen mucus and are effective at reducing throat pain.