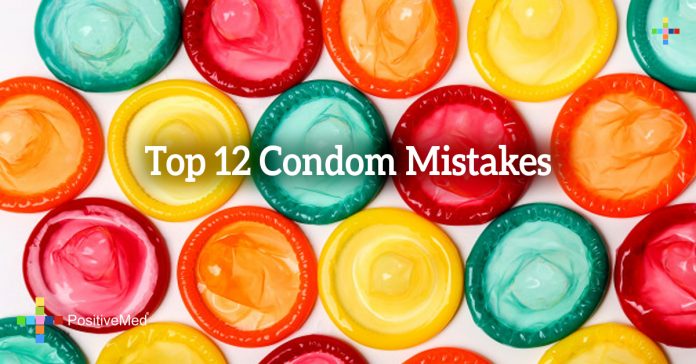 • Not checking for physical damage

In a survey it was found that approximately 75% condom users do not pay attention to physical wear and tear that might be there, even if they have opened the condom packet using a sharp object or teeth.

About 61% of men worldwide do not check the expiration date printed on the wrapper of the condom. Condoms last for more than 5 years from manufacture date, but some condoms kept in wallets become unfit for use because of body heat and mishandling.

In a sexual behavior study it was found that 43% of men reported putting on the condom after starting penetration. Some sperm already release before the final extravaganza which may result in sexually transmitted diseases and unwanted pregnancy.

• Not leaving space at the top

About 40% of condom users do not know that the top of the condom should be squeezed before use to get rid of the air and make space for sperm. Not doing this can result in the condom breaking during love-making.

• Taking it off too soon

About 15% of men report taking the condom off early for various reasons including losing an erection. People often think that ejaculation cannot take place without an erection which is not true. Removing the condom too early can lead to STDs and pregnancy.

• Putting it on incorrectly

About 30% of men put the condom on inside out which results in the condom slipping off during love-making. After its on it should look like a ski cap with bottom edges rolled up. If its used any other way its more likely to slip.

Between 1.4 to 3.3% of people reported reusing a condom during sexual encounters. A condom should only be used once and should be disposed of after use.

Around 16 to 25% people are not aware of the benefits of lubrication while using a condom. Lubrication is essential when you are having sex for an extended period of time.

Many people are not aware of how to store condoms. Between 3-19% people are keeping the condom in condition that are against the condom storage guidelines mentioned on the wrapper. Keeping them in direct sunlight or in your wallet degrades the quality of latex.

Some people completely unroll the condom before application. Doing so makes it difficult to put on and may result in a mess.

Some people think that using a condom decreases sexual pleasure, simply not true. Condoms can add to pleasure and a healthier sex life.

Approximately 29% of users have reported breaking of condom during love-making. User mistakes are responsible for this, not the quality of the product. Using oil for lubrication jeopardizes the quality of latex which results in breakage.