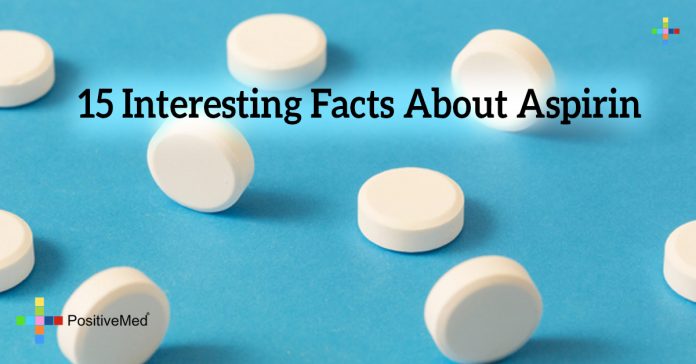 • In 1950 aspirin was acknowledged as the world’s highest-selling drug, by the Guinness Book of World Records.

• Aspirin is so popular that approximately 3500 scientific articles are written every year about it.

• The melting point of aspirin is 135 Degrees Celsius.

• Aspirin is often addressed as a wonder drug as it is used to cure many conditions. Around 100 billion aspirin tables are produced every year.

• Aspirin can cure more than 50 disorders.

• Mini strokes can be prevented by taking small doses of aspirin daily.

• Aspirin reduces the risk of heart disease in diabetic patients.

• The freshness of plucked flowers can last longer by adding an aspirin to the water of the vase. This is due to salicylic acid, which plays an important role in plants’ defense systems.

• Originally aspirin was discovered by a German chemist in 1897. It is made from a natural substance called Salici which is found in willow trees.

• As per a study conducted in 2011, intake of 2 aspirins daily reduced the risk of colon cancer by 63% among people at high risk for colon cancer.

• Use of aspirin in a face mask makes your skin complexion fairer. Just add a few tablets to some water in order to make a smooth and soft paste, then apply it to your face and leave it for 10-15 minutes. Wash your face and feel the difference.

• Aspirin relieves the inflammation caused by the bite of mosquitoes and bees. Just wet your skin and rub an aspirin tablet over the affected area.

• Swimming in a chlorinated pool may affect your hair color adversely if you have light-coloured hair. Dissolve 8-10 aspirin tablets in warm water and rub the solution into your hair thoroughly. Let it sit for 10-15 minutes, then rinse.

• During the times of hyperinflation in South America last century, aspirin was used as currency. Reportedly, it was the practice at the time to hand over a few tablets of aspirin as change as it held its value considerably better than the actual currency.

• Aspirin is good for your brain also. It can reduce memory loss in older people.