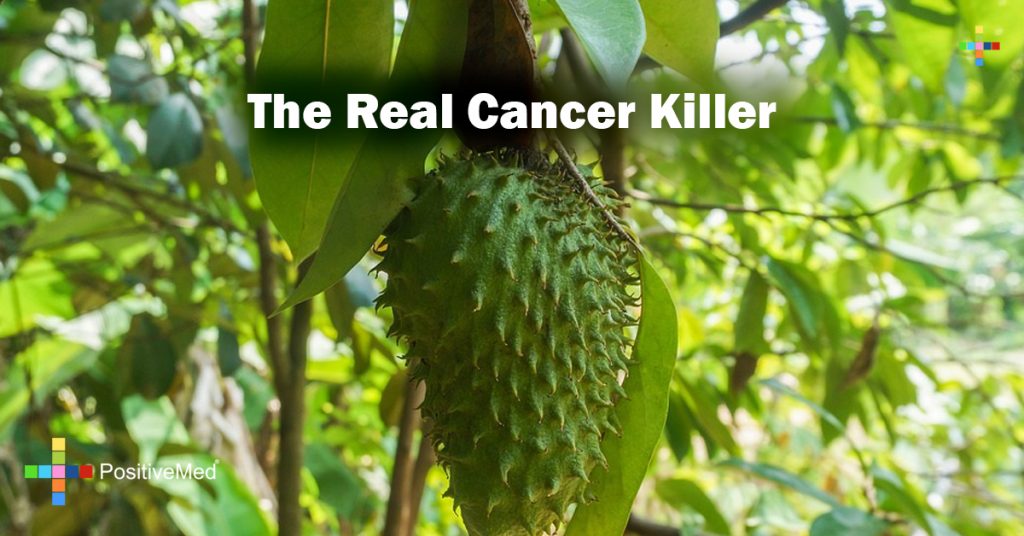 Cancer is one of the worst and most common diseases; it affects nearly 1 in 3 people at some stage in their life. It is well known that food is one of the most common causes for this terrible disease, so the better way to prevent it or fight it is by having a balanced diet and lifestyle.
The available options leave you feeling incredibly ill and disable you for months, or even years, this is the main reason why so many cancer patients are turning to alternative medicine to help cure them of the disease.

Nature is full of natural treatments for many illnesses, in this specific case (cancer) soursop has been found to be 10,000 times stronger than chemotherapy at attacking and killing cancer, but of course pharmaceutical companies do not want you to know this since they cannot patent natural chemicals.
These companies are trying to re-create the chemical structure in order to make synthetic acetogenin that can be patented and marketed to its full potential, one reason why they don’t support publically this plant’s miraculous effects against disease and illness.
Nature is the cure, we are aware that this plant is powerful, you don’t need a drug made from the plant, all you need is the delicious plant itself. Fight diseases hand in hand with nature.

Here are couple of peer-reviewed articles that suggest strong anti-cancer properties of soursop for patients with different forms of cancer such as pancreatic cancer and a form of skin cancer:

: Those of you who know someone with pancreatic cancer know this is one of the worst forms of cancer with a high morbidity. I personally have lost a family member to it and this cancer goes so rapidly that you can’t even imagine! Now this study, performed both in-vivo and in-vitro, shows that the active agents in soursop inhibit the generation of pancreatic tumors and their metastasis which may lead to generation of new drugs:

Pancreatic tumors are resistant to conventional chemotherapies. The present study was aimed at evaluating the potential of a novel plant-derived product as a therapeutic agent for pancreatic cancer (PC). The effects of an extract from the tropical tree Annona Muricata, commonly known as Graviola, was evaluated for cytotoxicity, cell metabolism, cancer-associated protein/gene expression, tumorigenicity, and metastatic properties of PC cells. Our experiments revealed that Graviola induced necrosis of PC cells by inhibiting cellular metabolism. The expression of molecules related to hypoxia and glycolysis in PC cells (i.e. HIF-1α, NF-κB, GLUT1, GLUT4, HKII, and LDHA) were downregulated in the presence of the extract. In vitro functional assays further confirmed the inhibition of tumorigenic properties of PC cells. Overall, the compounds that are naturally present in a Graviola extract inhibited multiple signaling pathways that regulate metabolism, cell cycle, survival, and metastatic properties in PC cells. Collectively, alterations in these parameters led to a decrease in tumorigenicity and metastasis of orthotopically implanted pancreatic tumors, indicating promising characteristics of the natural product against this lethal disease.

Annona muricata L (Annonaceae), commonly known as soursop has a long, rich history in herbal medicine with a lengthy recorded indigenous use. It had also been found to be a promising new anti-tumor agent in numerous in vitro studies. The present investigation concerns chemopreventive effects in a two-stage model of skin papillomagenesis. Chemopreventive effects of an ethanolic extract of A. muricata leaves (AMLE) was evaluated in 6-7 week old ICR mice given a single topical application of 7,12-dimethylbenza(α)anthracene (DMBA 100 μg/100 μl acetone) and promotion by repeated application of croton oil (1% in acetone/ twice a week) for 10 weeks. Morphological tumor incidence, burden and volume were measured, with histological evaluation of skin tissue. Topical application of AMLE at 30, 100 and 300 mg/kg significantly reduced DMBA/croton oil induced mice skin papillomagenesis in (i) peri-initiation protocol (AMLE from 7 days prior to 7 days after DMBA), (ii) promotion protocol (AMLE 30 minutes after croton oil), or (iii) both peri-initiation and promotion protocol (AMLE 7 days prior to 7 day after DMBA and AMLE 30 minutes after croton oil throughout the experimental period), in a dose dependent manner (p<0.05) as compared to carcinogen-treated control. Furthermore, the average latent period was significantly increased in the AMLE-treated group. Interestingly, At 100 and 300 mg/ kg, AMLE completely inhibited the tumor development in all stages. Histopathological study revealed that tumor growth from the AMLE-treated groups showed only slight hyperplasia and absence of keratin pearls and rete ridges. The results, thus suggest that the A.muricata leaves extract was able to suppress tumor initiation as well as tumor promotion even at lower dosage.

The cell inhibition activities of several Annonaceous acetogenins, covering the three major structural classes of bis-adjacent, bis-non-adjacent, and single tetrahydrofuran (THF) ring compounds and their respective ketolactone rearrangement products, were tested in an in vitro disk diffusion assay against three murine (P388, PO3, and M17/Adr) and two human (H8 and H125) cancerous cell lines as well as a non-cancerous immortalized rat GI epithelial cell line (I18). The results demonstrate a dose-dependent inhibition of cancerous cell growth, while non-cancerous cell growth is not inhibited by the same dosages. All of the acetogenins, irrespective of their various structural types, inhibit the growth of adriamycin resistant tumor cells and non-resistant tumor cells at the same levels of potency. These results show that the Annonaceous acetogenins are an extremely potent class of compounds, and their inhibition of cell growth can be selective for cancerous cells and also effective for drug resistant cancer cells, while exhibiting only minimal toxicity to ‘normal’ non-cancerous cells.

#4– Another article here suggests that the alcohol-based extract of the soursop leaves has strong anti-inflammatory benefits and also reduces the pain. As you know many forms of skin cancer cause a lot of pain in the patients. So this study might open the door for production of new natural based drugs for people who suffer from those pains. Here is more information:

#5– Although this study is performed on Annonacin, extracted from apple custard, this compound is also found in Soursop. This research also suggests strong anticancer properties of this compound in various cell lines.

Annonacin, a mono-tetrahydrofuran acetogenin, arrests cancer cells at the G1 phase and causes cytotoxicity in a Bax- and caspase-3-related pathway.

Annonaceous acetogenins are a group of potential anti-neoplastic agents isolated from Annonaceae plants. In this study, we purified annonacin, a cytotoxic mono-tetrahydrofuran acetogenin, from the seeds of Annona reticulata and analyzed its biological effects. Herein, we have shown that annonacin caused significant cell death in various cancer cell lines. T24 bladder cancer cells at the S phase were more vulnerable to the cytotoxicity of annonacin. Furthermore, annonacin activated p21 in a p53-independent manner and arrested T24 cells at the G1 phase. It also induced Bax expression, enhanced caspase-3 activity, and caused apoptotic cell death in T24 cells. In summary, these results suggest that annonacin is potentially a promising anti-cancer compound.