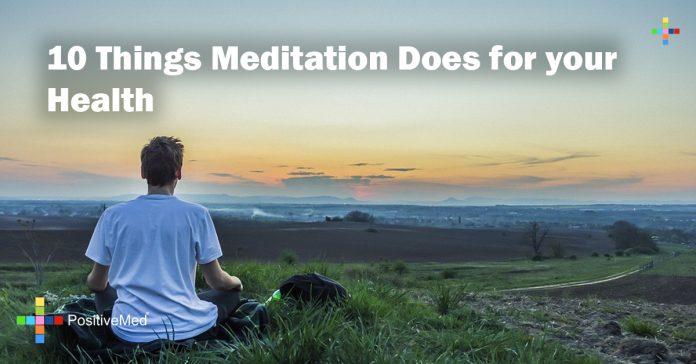 10 Things Meditation Does for your Health

Contrary to what some may believe, meditation is much more than a religious practice, in fact it has many benefits for a person’s emotional and physical health.

It has been shown that when you meditate at least 11 hours per month you’ll see increased cognitive performance and greatly increased mood because it increases white matter around the anterior cingulate cortex, which controls mood; among other things, it helps lower levels of anxiety, anger, fatigue, and depression.

It was proved by scientific analysis that people who meditate reduce their levels of stress, therefore their results after phototherapy during psoriasis treatment were measurably better than those who didn’t meditate.

8. Reduces risk of schizophrenic episodes and other psychotic disorders

Meditation turns off the part of the brain with ‘me’ thoughts and mind wandering, allowing people to be more present-centered rather than self-centered. Meditation can help someone who might be at risk to avoid contracting the disease, or to better control symptoms.

Meditation reduces stress and helps people cope with cravings while increasing mindfulness. This can work for any addiction, including alcohol, drugs, and cigarettes.

Meditation can significantly improve your immune system. If you tend to get sick often or suffer from an autoimmune disease, this can be a great way to improve your life.

Meditation helps you control cravings, stops you from stress-eating, and can lead to significant weight loss over time.

Meditation may lower the activity in the default mod network, known for causing the buildup of beta amyloid plaques in Alzheimer’s disease.

Researchers have known for a while that those who meditate regularly for a long period of time have increased cognitive ability, including increased brain connectivity and better fluid intelligence.