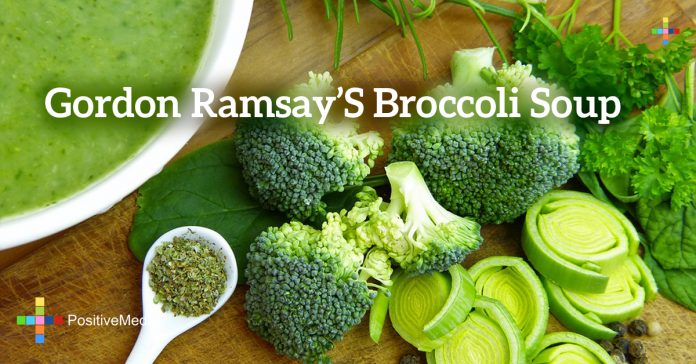 I’m a fan of broccoli and cheese; so when today I bought some broccoli, I planned to make some creamy broccoli soup. I googled for the recipe, but what surprised me was that most of the recipes have chicken/vegetable broth in them. If you’re vegetarian and you look for a vegetarian recipe, you’d be disappointed to see chicken broth in broccoli soup. I finally found this amazing and simple recipe, for this healthy soup.

Interestingly, Gordon Ramsay made this soup in a competition against the owner/head chef of Clubway 41, that used 20 different ingredients! But Gordon Ramsay’s soup only consists of just 3 ingredients.

Broccoli is a plant of the Cabbage family, Brassicaceae (formerly Cruciferae). It is classified as the Italica Cultivar Group of the species Brassica oleracea. Broccoli possesses abundant fleshy flower heads, usually green in color, arranged in a tree-like fashion on branches sprouting from a thick, edible stalk. The large mass of flower heads is surrounded by leaves. Broccoli most closely resembles cauliflower, which is a different cultivar group of the same species, but broccoli is green rather than white. In the United States, the term refers exclusively to the form with a single large head.

The word broccoli comes from the Latin broccolo, diminunitive of the term for a sprout. Broccoli is a cultivar of wild cabbage, remaining exactly the same species. Wild cabbage originated along the northern and western coasts of the Mediterranean, where it was apparently domesticated thousands of years ago. That domesticated cabbage was eventually bred into widely varying forms, including broccoli, cauliflower, cabbage, kale, kohlrabi, and brussels sprouts, all of which remain the same species.

* Broccoli is high in vitamin C and soluble fiber and contains multiple nutrients with potent anti-cancer properties including diindolylmethane and selenium. The 3,3′-Diindolylmethane found in broccoli is a potent modulator of the innate immune response system with anti-viral, anti-bacterial and anti-cancer activity. Broccoli also contains the compound glucoraphanin, which can be processed into an anticancer compound sulforaphane, though the benefits of broccoli are reduced if the vegetable is boiled. A high intake of broccoli has been found to reduce the risk of aggressive prostate cancer. Broccoli leaf is also edible and contains far more betacarotene than the florets.

To see some other benefits of broccoli in fighting against PMS click here.