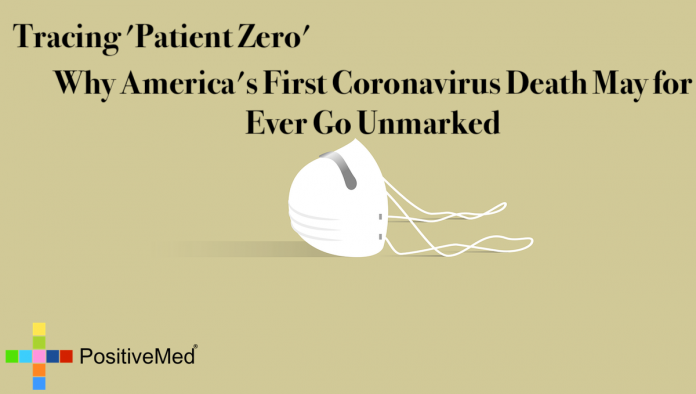 While the US experts are still investigating this world-widely spread illness, they are also trying to chase down its US source, the famous ‘patient zero’ but with no results. Why is pinpointing the coronavirus arrival to America so hard? ‘We’re not going to exhume bodies and test them’, said George Rutherford, an epidemiologist at the University of California, San Francisco – and apparently, much about these early cases will probably remain unclear forever.

By now, the US is officially nearing the bleak milestone of 100,000 confirmed coronavirus deaths. However, since the real date of the first death may go unmarked it can remain impossible to guess who was the ‘lucky’ one. The death toll will probably have hit that figure days before the official tallies reflect it.

The first report of coronavirus in the US came on 21 January, when a man in Washington state, who had traveled to Wuhan, tested positive. The models of the COVID-19 ‘travels’, as they are being reconstructed now, show that the virus was making its way through America’s major cities, undetected, weeks before the first American died of it officially. On February 29, 2020, in the Seattle area, nursing home outside the city reported what was believed to be the first US death caused by COVID-19.

What was there but wasn’t said out loud

Coronavirus cases were also identified in California in late January, initially among those who had recently traveled to Wuhan. By late February, California’s governor, Gavin Newsom, said officials were monitoring more than 8,400 patients – but the state had only 200 testing kits. Moreover, testing became America’s problem for a long haul, and it was a rather costly issue when it comes to deadly patients’ cases. Tests were difficult to come by across the nation after the Centers for Disease Control and Prevention (CDC) had botched the rollout of diagnostic kits and delayed allowing private and academic labs to develop their own.

Is it any worse than in other countries?

There is rather nothing severely failed in the US system compared to other nations throughout the world, at least when it comes to the first response to coronavirus. Just as everywhere else, only the most severely ill patients were being tested initially, and those who had recently traveled were prioritized.

Suspicions of the beginning of that all

Optimistically, large hospitals and academic medical centers routinely preserve and store tissue samples from autopsies for six months to a year. We are in May, so it’s still potentially possible to track down everything that happened in the COVID-19 case along the way. In April, an analysis of samples from the autopsy of a 57-year-old Santa Clara woman who died suddenly in her home on 6 February revealed that she succumbed to the disease. The woman probably contracted the virus at least a week or two before she died. However, the fact that she had not traveled outside the country shows another significant note. It means that coronavirus was spreading within the community at least by mid-to-late January.

Continuing to search for the crucial answer

Recently, Washington officials have been looking into the cases of two patients with symptoms typical of COVID-19 in late December who tested positive for antibodies to the virus. There is an option though that these patients could have suffered from severe flu or other respiratory illness, and only contracted the coronavirus later. That’s why these test results don’t give the answer we are so eager to obtain. ‘There’s a chance that there were more infections that resulted in death, at a time when we didn’t know about this novel coronavirus,’ said Andrew Badley, chair of the Mayo Clinic’s COVID-19 research task force. Newsom, the California governor, ordered coroners in the state to review autopsies back to December.

Before mid-February, only two of nearly 3,000 people with respiratory disease symptoms were noted as infected with the coronavirus. A severe flu season, making people sick in January and February, doesn’t make the whole thing easier to differentiate from coronavirus.

It’s still unclear for the specialists, why, if the virus was circulating early, patients were not overwhelming hospitals early on. ‘All viruses can mutate and change a little bit over time,’ said Badley. By tracing different strains of the virus, researchers can estimate when each strain was introduced to a region, but the process is tricky and requires that the older strains of the virus still be around – either preserved in tissue samples or spreading through the population. It doesn’t surprise that, with so many variables, tracking down the ‘zero patient’ is such a big deal.