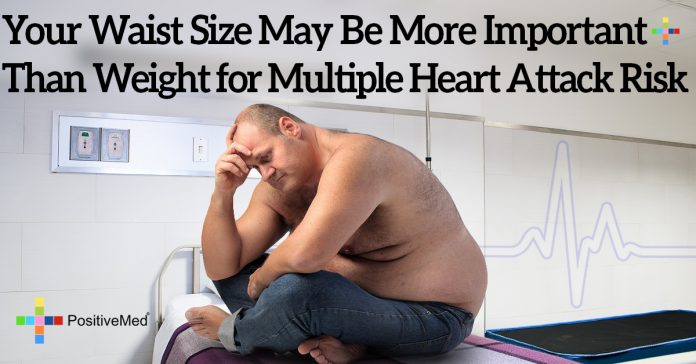 Being overweight is almost always linked to some corresponding medical pieces of advice. One of the reasons that makes it so hard to accept oneself in a fatty version is not about fashion anymore, it’s doctors that make you live healthily! This time, researchers have some new, striking scientific facts regarding heart attack survivors. You don’t have to work on your charmingly chubby body in general, but only on some little part of it (well, its actual size depends on how plumpy it is). You guessed it! We’re talking about the main hero of many girls’ talks, Mr. tummy.

It’s not about being generally overweight, but having a fluffy belly, with too many extra kilos, that appear to be linked with a greater risk of another heart attack among its survivors. That’s why checking your waistline size regularly and keeping it fit, may be important for your heart’s health. At least now, after the following research was published, it seems more pivotal than monitoring general weight issues. So Meghan Markle the trend of being super skinny with no hesitation, but keep examining your waist’s size (as you would anyway)!

Who doesn’t like pot belly? We all love them. So what’s all the fuss about? Quite credible guys from the European Journal of Preventive Cardiology have confirmed that fat tummy not only increases the odds of having a first heart attack, but also further ones. Mind that beer bellies are present among many slim people as well. This research is so important because it’s the first time that scientists found a link between precisely a belly fat and the above-mentioned health risk.

But don’t worry ladies. It’s more men than women that are put at risk in this particular regard. Research showed that the link was stronger and more linear in men. In women, the relation was “U-shaped”. The mid-range waist measurement was the least risky (not the narrowest!). Mind that, what they call “the middle”, is usually already called abdominal obesity – 80 cm wide. We couldn’t have been luckier! So let’s cultivate our tummies girls, cause this is what they are made for, but also be careful not to overdo! When it comes to men, your beer belly is your worst enemy. Men have probably more visceral fat. This one goes deep inside your body and wraps around your organs, is further turned into cholesterol. Girls’ tummy fat doesn’t do that! Women grow relatively harmless, subcutaneous fat.

What’s crucial for both sexes, regardless of how crazy the number of meds for the heart’s health you’re currently taking and how strikingly perfect your blood test results are, when it comes to your health well-being, your belly fat will still prove you wrong.

As researchers from Stockholm found, most probably recurrent heart attack/stroke events may happen after the first misfortune if the fat belly is involved. Actually, not researchers themselves in the course of creativity flow but the deepened observation proved the hypothesis. More than 22,000 Swedish patients were looked at. The effect is, as follows – maintaining good waist circumference helps you prevent the bad energy of heart diseases and strokes from happening.

The study tracked the lives of loads of Swedish guys (men and women) to prove the titular truth. Researchers particularly closely observed the link between their waist circumference and events caused by clogged arteries like fatal and non-fatal heart attacks and stroke. We might have still not believed if it was just single research. It happened to be a longitudinal four years-long study. That already sounds pretty serious. The majority of patients had abdominal obesity (waist circumference equal to or above 94 cm for men and 80 cm women according to the World Health Organization). Whereas its risk substantially increased in men with a waist wider than 102 cm and 88 cm in women. Interestingly, the association of waist circumference was independent of any other factors like popular, well-known reasons to get your poor heart to suffer, like diabetes, hypertension, smoking, body mass index, and even prevention treatments.

How to keep your abdomen pretty and fit? Never stop practicing a healthy diet, regular exercise (everyday cardio like 30 minutes of walk is perfect). Sit-ups and strength training won’t help, because they don’t affect visceral fat, they can only tighten abs hidden below the fatty cover.