PositiveMed The Positive Side of Medicine
Home health sleep What is Tryptophan? How Does it Boost Sleep Quality and Mood? 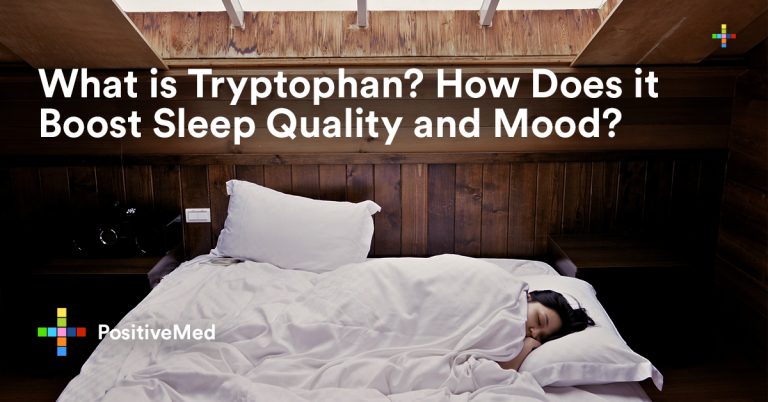 We are all aware that a good night’s sleep is crucial to make the next day perfect. Additionally, there are many nutrients that enhance your mood and improve good sleep quality.Tryptophan is an important amino acid that can be found in many protein-rich foods and supplements. It plays a major role in protein synthesis and other molecules that improves mood and sleep.

Apart from making proteins, the amino acids in your body are also involved in other functions. For instance, they help in the production of other molecules that serve in the transmission of signals.

Tryptophan is converted into a molecule known as %-HTP (5-hydroxytryptophan), which helps to produce melatonin and serotonin.

Melatonin is a hormone that helps to regulate your sleep-wake cycle. On the other hand, serotonin plays a number of roles in ensuring that your brain and intestines are working optimally.

Generally, tryptophan and the molecules it helps to produce are crucial in ensuring that your body functions normally.

Effects of Tryptophan on Mood, Behavior, and Cognition

The impact of tryptophan in the brain is most notable although it serves many other functions in the body.

A number of studies have demonstrated that patients with depression have lower levels of tryptophan.

Other studies have examined the effect of altering tryptophan levels in the blood. In one study, participants were administered large amounts of amino acids. Some took with tryptophan while the other didn’t.

In one study, 15 healthy adult participants were exposed to a stressful environment on two occasions. One was when their tryptophan blood levels were normal. During the second occasion, they had low tryptophan levels in their blood.

The researchers discovered that feelings of nervousness, anxiety, and tension were higher when the participants had low levels of tryptophan.

According to their findings, low levels of tryptophan can lead to anxiety. Additionally, an increase in impulsiveness and aggression was witnessed in aggressive participants.

However, tryptophan supplementation can help to promote good social behavior.

These observations were made irrespective of whether the participants had a family history of depression or not.

In addition, an extensive review discovered that lowering of tryptophan levels negatively affected cognition and memory.

In particular, memory linked to experiences and events were impaired.

These effects may have occurred because lowering tryptophan levels interferes with the production of serotonin.

Tryptophan Effects in the Body

Tryptophan is converted into the molecule 5-HTP. This is in turn used in the formation of serotonin.

Several experiments have shown that the many effects of low or high tryptophan levels occur due to its effects on 5-HTP or serotonin.

This is the main reason why many medications for dealing with depression try to modify the action of serotonin in the brain to enhance its activity.

In addition, serotonin influences a number of processes in the brain that control learning.

Treatment with 5-HTP can be helpful in boosting serotonin levels in the brain. In turn, they can improve mood, alleviate panic disorder, and promote quality sleep.

Tryptophan Impact on Melatonin and Sleep

Serotonin can be converted into another essential molecule called melatonin once it has been produced from tryptophan in the body.

A study has shown that both serotonin and melatonin levels in the blood increases when tryptophan levels are raised in the body.

Melatonin normally occurs naturally in the body. However, it can be found in various food sources, including grapes, tomatoes, and strawberries. You can also find melatonin as a popular ingredient in many supplements.

Melatonin regulates the sleep-wake cycle of your body. This cycle can directly impact other functions in the body, including the immune system and nutrient metabolism.

Studies have found that increasing the consumption of tryptophan can enhance quality sleep by boosting melatonin levels in the brain.

In one study, participants who ate tryptophan-enriched cereal at breakfast and dinner had higher levels of melatonin and serotonin. They reported sleeping faster and longer compared to their counterparts who took standard cereals.

Additionally, there was a reduction in their anxiety and depression symptoms.

Where to Find Tryptophan

Tryptophan can be found in many foods that are rich in protein. Some good sources include shrimp, egg, crab, elk, and poultry.

It is estimated that a typical diet offers 1 gram of tryptophan per day.

Tryptophan can also be found as a supplement.

You can improve both the quality of your sleep and overall wellbeing using tryptophan supplements. You can pick supplements with molecules derived from tryptophan, such as melatonin and 5-HTP.

Tryptophan is assumed to be safe when taken in normal quantities because it is an amino acid. Very few side effects have been reported although it has been examined for over 50 years.

However, some people have reported occasional side effects, such as nausea and dizziness.

Most of these side effects occur when tryptophan is used along with other drugs that impact serotonin levels, including antidepressants.

Serotonin syndrome can occur when activity of serotonin is excessively increased. It can trigger symptoms like tremors, sweating, delirium, and agitation.

You should talk to your doctor before using tryptophan supplement if you are under medications that affect your serotonin levels.