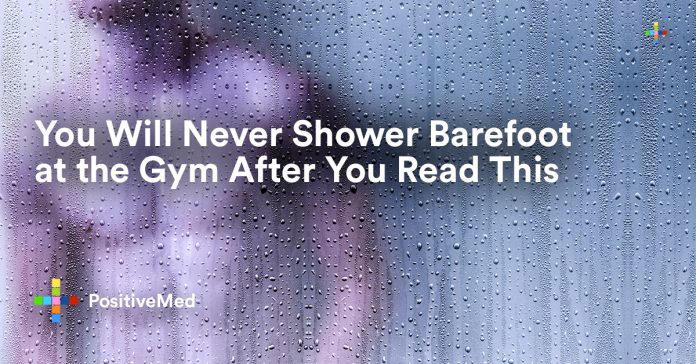 Are you among those people who stroll into the gym shower without a pair of cool slides, be ready to be scared. A certain guy in Texas got a flesh-eating infection when he took a shower barefoot in his own gym. According to reports by Daily Mail, it began as a single wart and the later grew into five of them.

He suffered several months of pain and tried many remedies but all of them failed. The man, who sought anonymity, went through skin graft surgery with fish scales. It is two months now down the line after surgery; the man is still a month away from walking properly. He is a listener of Houston’s 94.5, The Buzz, and he sent his photos and stories to the station in order to get out a good word. The photos are scary and for sure don’t shower barefoot.

This man was preparing and training for marathon before his plans were thwarted. During his sessions of a regular gym at lunch break, he forgot to wear his flip flops and obliviously decided to take a shower so as not to return to work smelling unpleasant.

On his feet, it developed a hard spot that was itchy. In the long run, it grew into a wart. After a thorough examination the doctor said it was a gentle tumour which is caused by (Human Papilloma Virus) HPV. He used home remedies to treat for six months before eventually seeing someone again. Shockingly, it is during this treatment that the infection spread significantly and worsened. Finally, he had no choice other than to turn to surgery.

What you need to know about HPV

It is a virus named for warts. Some types of HPV can result in cancer. Both men and women can get cancer of anus, and mouth which is caused by this virus. Men can be infected with penile HPV cancer while in women this virus can also cause vaginal and cervical HPV cancers. However, there are vaccines that can prevent HPV that causes cancer.

Related link: What Happens If You Skip Showers for Two Days

How is HPV transmitted?

It can be transmitted when you have skin to skin contact with an infected person. It is so common that almost every man or woman will get it in their lifetime. The symptoms can manifest several years after the infection. This makes it hard to notice when you at first become infected. Usually, the virus disappears on its own without causing any health problem. But once it infects you, it will cause health problems like warts such as those infected that guy.

When he was asked what he had to say about his infection, he said that we should do ourselves a favour by wearing shoes in any public places where there is water. He further said that the worrying thing is that the virus can stay on surfaces for over two years. His parting shot was that you should take care of your feet so that they can care for you.