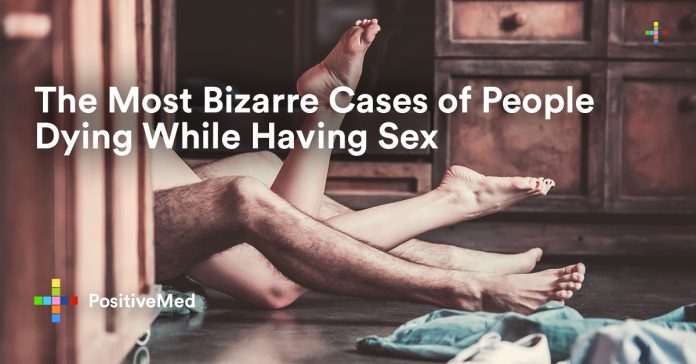 Imagine enjoying your favorite pastime with your significant other only over dead at the end of it or even before it is over. Believe it or not, people succumb to death while enjoying their conjugal right and it’s not because of their stupidity but fate. The following tragic stories highlight the unfortunate people who died while making love.

In 2011, Zheng Gang, a trainee doctor, died of heart attack after over-exerting himself to produce a sample at a sperm bank. The 23-year-old had spent two hours in a sperm booth at China’s Wuhan University. Before his death, he had visited the booth four times that week.

A couple from Columbia, South Carolina, plunged to their deaths in 2007 after falling undressed from the roof of an office building. A taxi driver discovered the bodies of Brent Tyler and Chelsea Tumbleston in the middle of an empty street at 5 a.m. Both were 21 years old during their tragic incidence. Their clothes were later spotted on the roof of a nearby building. It is believed that the couple was enjoying a risky outdoor romp before plunging from the roof.

Jealousy can indeed be lethal and polygamy can sometimes work against you. In July 2012, Uroko Onoja, a Nigerian was raped to death by his six wives. He was bonking his youngest wife when the other five wives descended on him with sharpened sticks and knives. The five were also demanding to sleep with him. Unfortunately, Onoja dropped dead before the last wife could enjoy her fair turn.

4. Suffocated to death by lovers boobs

This happened inside a mobile home where Donna Lange, a 51-year old suffocated her lover to death. When questioned, the intoxicated woman said she didn’t know what happened. However, a witnessed claimed to have witnessed the woman crushing her lover’s face with her breasts.

In Jan 2008 in Craley, Pennsylvania, 27-year-old Kristen Taylor died after her husband electrocuted her nipples using a pair of electric clamps. The couple had been using many times electricity during intercourse. However, her husband Toby shocked Kristen for a few seconds too long, which triggered a cardiac arrest. Tody told authorities that his wife had electrocuted herself while reaching for the hair drier from the shower room. Eventually, he admitted that they enjoyed feeling some sparks while doing the dirty.

A 50-year-old Japanese man met his death after a mountain of p0rnographic magazines fell on him. Joji was found dead under a six-ton stash of explicit magazines at his neglected flat. Cleaners who were tidying his flat discovered that the entire apartment was rammed with p0rn magazines. It is unclear if the former car manufacturer succumbed to death after developing a heart attack and then falling into a stack of p0rnography, or the six-ton X-rated collection caused the crash.

8. Lion attack while romping in the bush

This happened in Zimbabwe in 2013. According to Zimbabwean news website, a couple was attacked by a lion after making love in the bush. Sharai Mawera was attacked by the big cat after interrupting the couple. Luckily, her unidentified lover managed to escape before he was mauled. The male lover, who managed to flee wearing only a condom, informed the police who later discovered the woman’s body at the attack scene.

9. A threes0me kills a policeman

A policeman died in 2009 while enjoying a threes0me – and his wife filed a case against his doctor for not warning him against bonking. The 31-year-old William Martinez met his death when romping with another woman and a male friend. His wife was compensated $3 million after suing his doctor who failed to warn him about his weak heart and was not supposed to engage in strenuous activities.

38-year-old Simon Burley died during a sick neo-Nazi roleplaying game with his lover Elizabeth Hallam. As part of a sex game they were playing, Burley had a noose around his neck while Elizabeth played the role a Nazi executioner. Regrettably, the executioner’s knife was blunt. The helpless man was left to suffocate at his house in Grimsby.

It is always good to take caution when enjoying your pastime with your significant other. Anything can happen especially when both of you are so helpless having the best time. Notably, most of these tragedies occur during unusual events and circumstances while lovemaking.