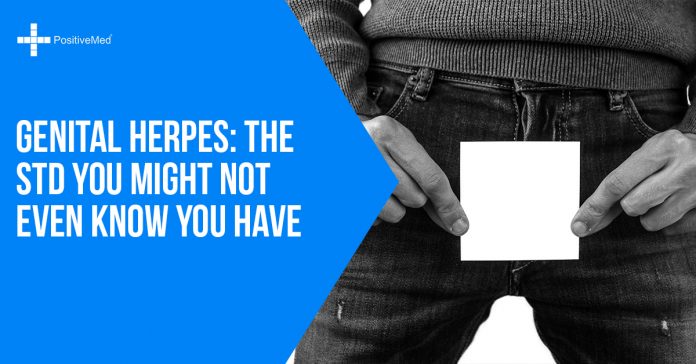 Did you know that approximately one in five people suffer from genital herpes that is caused by the genital herpes virus (HSV)? There are two types of genital herpes that cause different, yet similar, symptoms that can be irritating to manage. While symptoms can remain dormant for many years, they can be triggered by both emotional and physical stimuli.

While HSV-1 and HSV-2 are very similar, they may manifest with different symptoms in different parts of the body. HSV-1 usually remains dormant in the nerve cells near the base of the neck and cause viral shedding and outbreaks on the mouth or face. However, in the case of an HSV-2 infection, the herpes cells are located near the base of the spine and cause outbreaks in the genital area.

By definition, genital herpes is one of the most common sexually transmitted diseases that affect both men and women. Approximately one out of six individuals suffering from this disease that accumulates infectious fluids in sores. Genital herpes is commonly passed from one partner to the next from the skin to skin contact or coming into contact with the fluids from open sores.

Related link: You Probably Have Herpes And You Definitely Don’t Know It. Hidden Signs And Home Remedies For Herpes Treatment

Symptoms of a Genital Herpes Infection

The herpes simplex virus is very contagious and can easily passed from one person to the next even if the person is not aware of having the disease. Genital herpes can cause very irritating and uncomfortable symptoms that can worsen with irritation. The most prevalent symptoms of genital herpes are sores and blisters that are painful, itchy, and purulent.

An infection may go unnoticed for a period of time because it may appear as a pimple on the face and mistaken for general acne. Sores may appear on the mouth, anus, or genital area causing a red blemish that grows worse as it fills with fluid. During an outbreak, the infected individual may also experience a fever, body aches, and swollen glands.

Perhaps one of the most bothersome aspects of this disease is that it could take weeks for an outbreak to go away and sores to heal even with the use of medications. The sores may also leave a scar on the superficial layers of the skin. In fact, repeat infections and outbreaks are very common, especially within the first year of suffering with herpes.

The best way to identify what type of herpes you have is to not only analyze your symptoms but visit your doctor. A doctor can take a culture from the sore and perform tests to identify what strain of the herpes simplex virus that an individual suffers from. Once the strain of herpes is identified, the symptoms can be treated to stop the infection and prevent further outbreaks in the future.

What Happens During a Herpes Outbreak?

Initially, sores may appear as red, purple, or white tinted pimples around mucous membranes of the body. In rare cases, the herpes simplex virus has the ability to infect the eyes and internal organs, such as the brain that leads to viral encephalitis. When the first signs of this virus occur, the individual may experience non-stop and recurrent itching, aches, and a fever as the immune system works to fight the virus off.

However, since herpes is not curable, the immune system overcompensates and becomes weakened. Within hours or days, the skin breaks out in small clusters of blisters that are filled with fluid that often cause soreness and tenderness in the affected area. After roughly one week, the blisters will begin to heal and will dry into a yellowish crust that can be irritating in itself.

In the following three weeks or so, the sores disappear on their own after wreaking havoc on the immune and endocrine systems as well as the layers of the skin. With individuals who have compromised immune systems, the symptoms may be worsened and cause painful sores, swollen gums, and aching muscles. However, when the symptoms recur in the future, the symptoms are usually milder since the body has already tried to fight off the infection once.

Herpes and the Immune System

The body reacts in several ways once it has been introduced to the herpes simplex virus. Generally, the outbreak usually starts within ten days of the initial infection and sometimes years go by before individuals realize that they have been infected with this unsightly and annoying virus. The strength of an individual’s immune system plays a crucial role in the onset of symptoms due to this infectious virus.

Without a strong immune system, the body can be consumed and overtaken with the virus and result in numerous outbreaks that are persistent at the same time. Essentially, the health of the immune system leads to certain symptoms and their severity during the “primary” outbreak, or first exposure to the virus. During the first outbreak, the immune system actually develops antibodies and other biochemical weapons against the virus as soon as it is detected.

Accordingly, with each outbreak that occurs after that, the immune system has a memory of the virus and releases the same antibodies to the infected area to help fight off the infection more quickly. As a result, there are fewer and fewer sores that pop up in the genital area with each outbreak that occurs since the body becomes “smarter”, stronger, and more immune to the virus. Also, the “immune memory” helps to make each recurrent infection less painful and severe so that it can be managed more easily and killed off more quickly.

The issue of living with this virus is that individuals never know when they will experience an outbreak. Some people don’t experience a recurring outbreak for months or even years, which means that it takes a long time to build up immunity during an infection. In order to strengthen the immune systems reaction to the virus, there are certain natural ingredients that can be consumed to lessen the prevalence of this virus as well as decreasing the length of time that the infection lasts in the body.