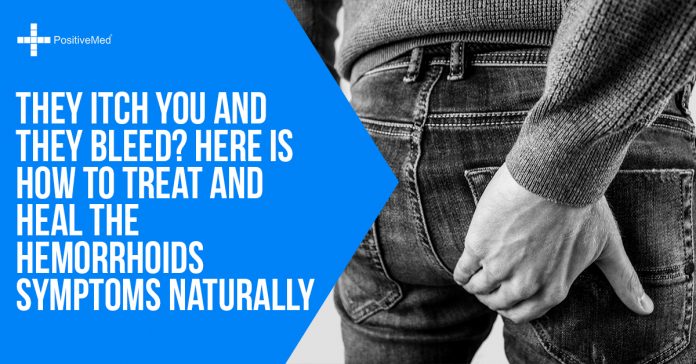 Hemorrhoids are likely to occur in up to seventy-five percent of the population of both the younger and older populations. This condition occurs when veins become swollen in the anus and become painful and problematic over time. They can cause many complications that are both painful and irritating, causing an individual to seek medical solutions. Fortunately, there are several natural and therapeutic options for treating the hemorrhoids symptoms. Treating hemorrhoids naturally can be accomplished with home remedies that include a combination of mineral, herbs, and vitamins.

This painful condition is formed when there is an increase in the amount of pressure in the rectum. When the rectal vein is swollen, it may cause the skin to stretch, bulge, and swell. While internal hemorrhoids rarely cause discomfort, external hemorrhoids create a protrusion of skin that can easily be irritated. When the tissue is irritated during a bowel movement, they can cause pain, itching, swelling, and bleeding. These pillow-like clusters of swollen veins usually affect at least half of the population at age 30 and older.

Hemorrhoid swelling occurs when more pressure is placed on the small vessels of swollen veins, which causes pain. There are several symptoms associated with this condition that occur during, before, and after a bowel movement. This condition is generally caused by other health conditions like chronic diarrhea or constipation, or obesity. Additionally, when an individual has a sedentary lifestyle or strains during bowel movements, more pressure is placed on the area. It is also thought that pregnancy may cause hemorrhoids to form due to the amount of pressure exerted.

Hemorrhoids occur in 1 out of 25 people and generally affect the older population but can affect young individuals too. There are many herbs, vitamins, and minerals that can be consumed to treat hemorrhoids in any stage or condition. Some herbs have anti-inflammatory and antiseptic properties among promoting the healing process that prevents the onset of hemorrhoids. Astringent herbs may help prevent swelling and clotting while reducing bleeding and repair damaged tissue in the affected areas. Herbs that can act on blood vessels to preventing the symptoms and shrink the tissues include:

Aesculus hippocastanum, the seeds of this plant contain active ingredient such as saponins and tannins that promote healing

Aloe barbadensis, is a plant high in nutrients that can heal cells, stop inflammation with its cleansing and cooling gel

Quercus spp., the bark can be used as a concoction to treat hemorrhoids due to its active ingredients ellagitannins, catechins and proanthocyanidins

This can be found in supplement form and is the “friendly” bacteria, lactobacillus and bifidus, that is good for healing

Plantago Psyllium, is full of fiber that can make bowel movements softer and easier to pass and stimulate cellular healing

Also known as melaleuca oil, can be applied with cotton to the area affected to reduce the inflammation and growth

Hamamelis virginiana, this herb has been used medicinally to treat circulation disorders with astringent effects

Steeping the ingredients in tea can create a powerful concoction to be added to a cold compress. The cold compress can help stop bleeding and even clean the areas affected for instant relief. The ingredients can also be made into a tea to be consumed to stimulate cellular healing internally. Cleaning the affected area with a solution of these ingredients can reduce pain and itching right away. Additionally, with a diet full of fresh fruits, vegetables, and fibers, the occurrence of hemorrhoids decreases drastically.

There are many methods to utilize herbal remedies to treat both internal and external hemorrhoids and prevent their occurrence. Using a cold compress on hemorrhoids can lessen the pain and reduce the risk of inflammation or infection. Accordingly, soaking in a bath of Epsom salt and an herbal substance can cleanse and heal the affected areas. In fact, dryness can irritate hemorrhoids, which is why it is important to stay hydrated with herbal teas. When a combination of herbs and different methods are used, hemorrhoids can be healed naturally and thoroughly.