Imagine two moles side by side. One is a bit darker than the surrounding skin, oval shaped and symmetrical. The mole right next to it has irregular borders. It looks like a spot of blood that never heals. These characteristics, irregularity, bleeding, and lack of healing, should send the person to a dermatologist, for they might be signs of malignancy.

Moles or nevi are concentrations of pigment on the skin. They can appear anywhere on the body and most of them are harmless. But sometimes what looks like a mole can actually be the beginning of skin cancer. Anybody can get skin cancer, but people who are fair and red-headed are more at risk. 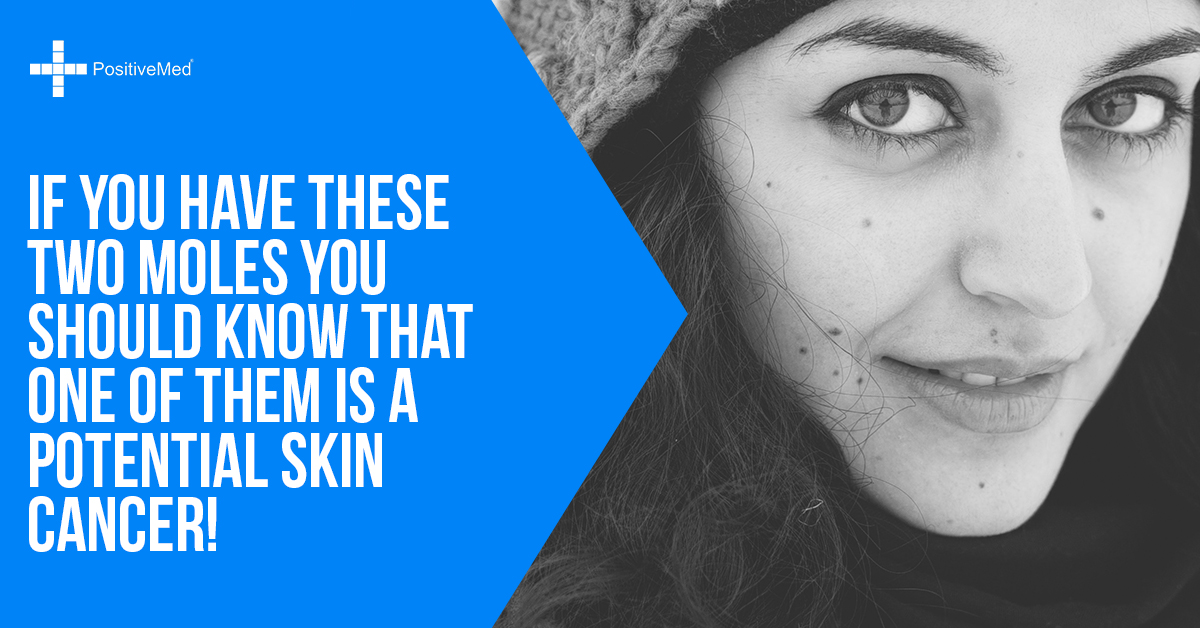 There are three main types of skin cancer:

Basal cell carcinoma or BCC is the most common and most often diagnosed with skin cancers. It’s usually found on areas of the body that are exposed to the sun, such as the face, the nose and the backs of the hands, but like all skin cancers, BCC can appear anywhere on the body.

BCC is slow-growing cancer that rarely metastasizes, though if it is not treated it can be disfiguring. There are several kinds of BCC, and they present in different ways. Among them are:

RELATED ARTICLE: HER PIMPLE WON’T GO AWAY FOR AWHILE. THEN DOCTOR REVEALS THAT THE BUMP IS A GROWING CANCER

• A domed growth that’s either the color of the surrounding skin or pinkish. Often, blood vessels can be seen inside it.
• A shiny, scaly patch that’s found on the body. It can be pink or red and may be mistaken for eczema.
• A hard, pale, scar-like growth that feels waxy.
• A sore that constantly bleeds, oozes, forms a crust and craters.

READ ALSO: The Number Of Moles On Your Arms Could Predict Your Skin Cancer Risk

• A rough-feeling lump or bump on the skin that grows into a dome. The dome often bleeds and crusts over.
• A flat, reddish, slow-growing scaly patch.
• A sore that either won’t heal, but heals temporarily and comes back.
• Rarely, SCC starts under a nail and destroys the nail as it grows.

Melanoma is the most dangerous type of skin cancer. People might mistake a melanoma for a normal mole, but in the case of the malignancy:
• The mole is asymmetrical. If you cut it in half, one-half is larger.
• It has irregular or fuzzy borders.
• The mole contains different colors. Normal moles may come in a surprising number of colors, including pink, red and blue, but they must be one even color.
• The mole is bigger around than a pencil eraser and growing.
• Unlike basal cell carcinomas, melanomas grow quickly.
• Like other skin cancers, melanomas can bleed and never heal. They can also itch and hurt.

A person should do a head to toe examination at least once a month or more if they are susceptible to skin cancer. If they find something suspicious, they can head to their dermatologist, who can do a biopsy to determine whether or not the lesion is malignant.

There are many types of treatments for skin cancer. Some are medicines and others are procedures. Among the procedures are Mohs surgery, which removes the cancer layer by layer until all of it is gone. Dermatologists have to be specially trained to perform Mohs surgery.

Other treatments include chemical peels, where acid is applied to the malignancy and the top layers of the skin slough off; cryosurgery, which kills the cancer cells by freezing them; laser surgery, which destroys the cells by burning and photodynamic surgery, which uses light to destroy the cells.

To prevent skin cancers, people should wear a sunscreen with a strength of at least SPF30 when they go out into the sun, and try to avoid going out when the sun is at its strongest. This is usually between 10 in the morning and two in the afternoon.

Once again, regular self-examination is important. The good news about skin cancers is that they are almost completely curable if they’re found and treated early.