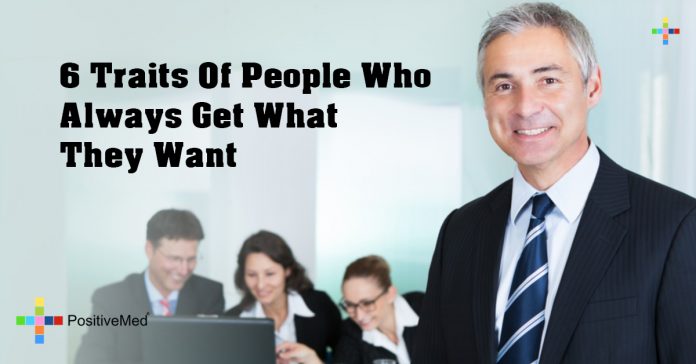 6 Traits Of People Who Always Get What They Want

Wanting something is one of the first desires that many people feel, even as infants. As people grow up, their ‘wants’ become more acute, and many people find out that only some people actually get what they want. The question then becomes: how can I get what I want? Luckily, there are a few concrete habits that people who get what they want all seem to have. Let’s take a closer look at six of these elusive, but extremely useful, habits.

It may sound relatively simple, but most people who are successful in life know how to ask for things. Asking is different than demanding, and asking and properly articulating ideas is different than asking in a vague or unclear fashion. Some people consider asking to be a sign of weakness, akin to begging or pleading, but that is just not true. Many professionals speak of the confidence that it takes to assert and articulate your needs, and the positive impact that this assertion can have on relationships with bosses, coworkers, and spouses.

Listening is hard to do, but people who listen to others are inevitably better prepared to negotiate and advocate for things that they want. So much of the content of relationships is reliant on listening, and people who have difficulty paying attention or remaining interested in what someone else is saying are beginning each conversation, interaction, or new relationship at a disadvantage. People who listen actively are more attuned to the needs of their conversational partner, and better equipped to find a solution where both parties can get what they want.

Have Relevant and Researched Information On Hand

Somewhat related to the last point, but important nonetheless: being able to speak confidently and coherently about what you want is one thing, but backing that opinion up with relevant facts is quite another. Should you be forced to debate or argue someone else about what you want, it is always better to go into that potential confrontation with information at the ready. Your superior, colleague, or partner will appreciate the effort that you’ve put into researching the topic, and you will come off as the better informed party – and the person most likely to receive what you’re asking for.

Ask For Help When You Need It

Asking for help is tricky: people dislike doing it too much because it makes them look weak or incompetent, but everyone has to do it once in a while. Picking your spots to ask for help can lead to you getting what you want, particularly in a work setting. If you want a promotion, asking for help and then demonstrating your competence afterward is an excellent way to show a superior that you respect their opinion, but also are capable of completing the job.

Prioritize Individual Relationships – In the Workplace, and At Home

Networking is a word that gets thrown around a lot in business circles, but it truly means only one thing: maintaining personal relationships. People who have allies, at home and in the workplace, are much more likely to be able to accomplish things that they want to get done. Friendships and connections unlock doors, opportunities and chances that otherwise would never have been possible.

Be Willing to Agree to a Fair Compromise

All this said – sometimes you simply will not be able to get all that you want. In this case, people who know how to get what they want will salvage some aspect of that desire with a compromise. Compromises work in the workplace and at home: researchers from Family Process have determined that the commitment level and marital strength of couples who regularly sacrificed for one another were stronger than similar figures in less sacrificial relationships. Knowing how to get at least part of what you want is an essential skill to have too!

There are many useful habits that will make you more likely to get what you want. Although it is difficult to cultivate all of the six listed above, even ensuring that you practice any three will drastically improve your chances of finding a successful outcome in life’s – and love’s – little quandaries.