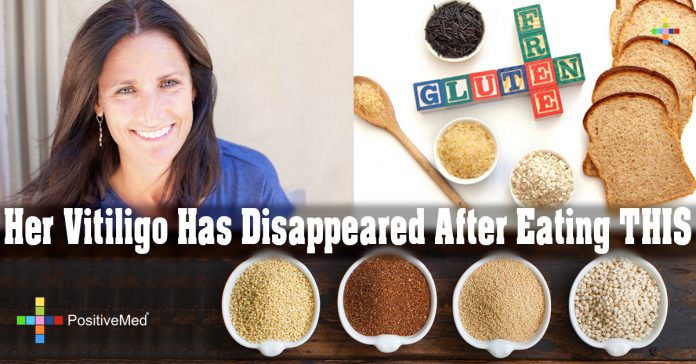 Her Vitiligo Has Disappeared After Eating THIS

In 2010, Alison St. Sure published a story about her experience with vitiligo on her website, “Sure Foods Living.” She shared a picture of herself as a child in 1973, and the photo showed the white patches of skin beneath her eyes that are characteristic of vitiligo. The other vitiligo on her body was not visible in the photo, but Alison reports on her site that she had eight large patches of light skin on the side of one of her legs as well. Light therapy treatments minimized the appearance of her vitiligo, but Alison did not experience much change in her condition until 2002, when she was diagnosed with celiac disease and began a new diet.

A Change in her Diet

The most common treatment for celiac disease is a gluten-free diet, so Alison began to change her diet accordingly. Alison was surprised to notice that over a period of eight years, her patches of vitiligo gradually filled in with darker-pigmented skin until they nearly disappeared. Curious to see if this had happened to others, Alison followed up with other individuals she knew of who also had vitiligo and had begun a gluten-free diet. She was astounded to learn that out of five people, three of them had experienced a marked change in their vitiligo.

Vitiligo occurs when the body attacks the cells that control skin pigmentation. The areas that are attacked then cause smooth, white patches to form on the body when the skin loses pigment. These patches often form on the hands and face. Vitiligo on the scalp causes white hair to grow from that area. It is not a painful condition, but people who have it are often sensitive about the way they look. Only around one percent of the population is affected by this condition.

How Does a Gluten-free Diet Help?

Why does a gluten-free diet reverse the appearance of vitiligo? The director of the University of Maryland Center for Celiac Research, Dr. Alessio Fasano, has found similarities between celiac disease and vitiligo.

Because gluten causes both auto-immune reactions in the body and leaky gut, it is not surprising that a gluten-free diet would be able to effectively treat these conditions. Gluten intolerance has also been linked to hives, eczema, and psoriasis.

Peter Green, a celiac disease expert, confirms that vitiligo can be reversed with a gluten-free diet. Additionally, a 2014 study published in “Case Reports in Dermatology” noted that a young Asian woman’s vitiligo improved drastically over a period of four months when she began to eat a gluten-free diet. The young woman had undergone topical treatments and light therapy, but these treatments had not lessened the appearance of her condition.

While more research is needed before gluten-free diets become a common treatment for vitiligo, research is beginning to prove that there is a link between the skin condition and gluten intolerance. Alison’s touching story proves that a person’s diet is one of the most important factors in his or her health.