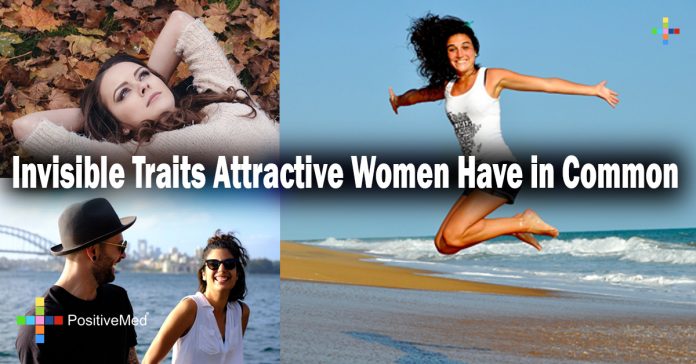 The expression, “good things are best-kept secret,” undoubtedly has a bearing on vast areas of life. While physical appearances, to an extent, matter to men, most males will disclose that the real attraction results from hidden characteristics. While this is a belief that is open to interpretation and personal preference, there are some invisible traits attractive women have in common.

A study conducted by the University of Miami discovered that humor demonstrates a woman’s mentality that the man she is interacting with might be a potential suitor who is up to her standards, due to the effort it takes to be humorous. Of the eighty heterosexual individuals used in the study, all of them found the trait to be attractive-especially the men.

Human beings are goal setters; all people wish to improve their lives to some degree. However, men have been depicted throughout society as the breadwinners, as they are the ones most likely to work, hunt, and strive to improve life for him and his mate. When a woman refuses to adopt this depiction, men find it intriguing and interpret it as a characteristic that will alleviate their own stress. This trait also demonstrates a fearless strength irresistible to men.

The reason behind this attraction circulates the correlation that the woman will also be a leader. A willingness to listen and expand her own thought process is calming to men. On the contrary, a woman who refuses to listen discourages men from their overall goals and reduces their motivation to improve.

Life is unexpected, so when a woman demonstrates the willingness to adapt, men find it attractive. This often circulates a human’s willingness to survive, and even depicts a relationship’s strength to overcome hardships. Additionally, it keeps the relationship generally exciting and refrains from the repetition that humans seem to detest.

Most forget that human beings are part of the animal kingdom, and retain the mentality to populate the earth. Like most species, human males are not the ones who typically care for the children, as they cannot adequately care for them naturally. When a woman shows motherly characteristics, men can see themselves building a future with her.

Nobody wants to coddle full-grown adults-especially men. If a woman constantly demonstrates that she needs reassurance, men will be deterred from her as a result of the energy needed to keep her grounded. Confidence often coincides with ambition and a fearless mindset, too.

This often correlates to being open minded. Having faith demonstrates a willingness to trust-something that is important in all relationships. A faithful foundation often shows that attractive women want to help shape the world to be better, and will be uplifting to their mate. All humans are born with the desire to help, but that is a trait that fades if not utilized. A sense of faith generally equates to being a generous, positive individual.

A generally happy person tends to be more motivated. When they are able to look past life’s hardships to see the light at the end of the tunnel, they try harder to uplift others. Essentially, this positivity is beneficial to the man, as he always has somebody to lean on for support. A positive perspective creates profound opportunities that the woman will strive for. People want to be around others that will make them happy and improve their lives, rather than somebody who seemingly exudes negativity.

To finalize, the best traits are hidden. Men tend to want a woman who can take care of herself, but that is also supportive and compassionate. A woman with these attributes has been heavily sought after for eons, and the desired traits in attractive women rarely change.