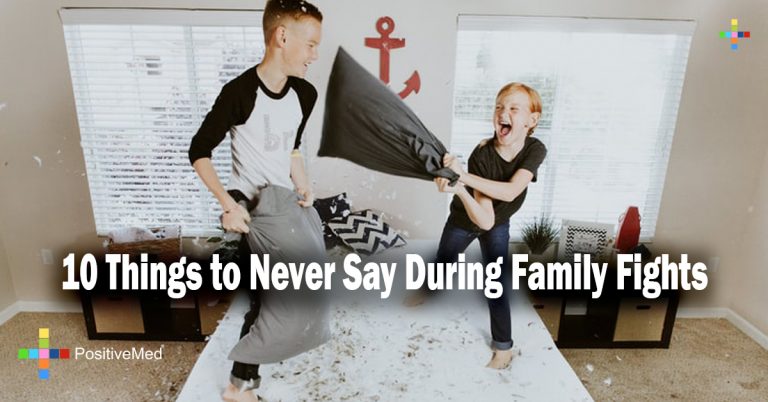 It’s impossible for a relationship to exist without some disagreement. That doesn’t mean the relationship isn’t strong, or that it won’t last a lifetime. It simply means that you are normal and have to deal with relationship issues just like everyone else. There is no magic guide you can read to teach you how to argue, but there are some things to never say during family fights.

This is a fairly selfish remark to make during family fights, as it shows a lack of accountability. Fault never or rarely lies with a single person in an argument, especially between spouses. Take responsibility for your own part in the disagreement instead of deflecting the blame away from yourself.

Depending on the context, this phrase could be seen as a compliment, but during an argument, it is almost always meant to be negative. Comparing your spouse to your in-laws is a good way to force a larger argument. Most people instantly defend their parents if such a statement is made because it not only insults the spouse, but it insults their parents as well.

There is absolutely no call for name-calling in the modern world, even during an argument. It doesn’t matter if it’s said in partial jest or out of earshot, it is still wrong. Name-calling solves nothing, and it only serves to cause emotional pain.

Generalities should be avoided in all aspects of life since they are apt to be wrong. It’s better to remove those words from your daily vocabulary, especially when it comes to describing the actions of people. Absolutes do not exist in human behavior, as much as we’d like to think they do. Using generalizations like ‘always’ and ‘never’ also shows a lack of faith in your spouse and their desire to grow.

RELATED ARTICLE: What Your Wife Really Wants You to Do When She Is Angry

6. My mother warned me this would happen.

Whether this phrase is true or not, it should not be used in an argument. It is generally a good idea to avoid discussing other people during an argument with your spouse, especially parents. It is fairly common for spouses to dislike their mother-in-law. Don’t make the situation worse by claiming the dislike goes in both directions. If you knew your mother was right about your spouse, why would you marry them?

Playing the victim does not help an argument resolve itself. In fact, these sorts of behaviors tend to make arguments worse. It is a good idea to refrain from telling people how they feel, regardless of the situation. You should never tell your significant other how they feel, especially during family fights when tempers are high.

This is usually a flat-out lie during an argument. People tend to claim they aren’t angry as a way of feeling like they have more control over the argument, but in reality, all it does is push the resolution farther away. Denying anger tends to build that anger beneath the surface, which can then explode outward. It’s much better to honestly discuss emotional issues that come from a place of anger.

Once again, it’s not a great idea to bring others into your argument, even in a purely theoretical sense. Do not compare your spouse with any other people you may know. Those people probably have just as many shortcomings in their personal relationships. No one is perfect, and comparing your spouse to someone else does nothing but add fuel to the fire.

A lot of different words and phrasing come flying out during an argument, and many of them are based solely on anger. Never threaten divorce on your spouse in the heat of the moment, because it can be hard to forget once the moment has passed.

If you can avoid using these words and phrases during arguments with your spouse, you’ll be able to maintain a healthy marriage for years to come. Arguments are basically unavoidable, but they don’t have to cause major problems if they are approached logically and with a clear head.