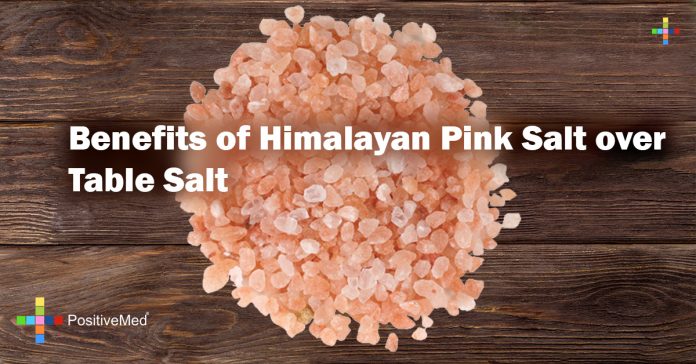 Salt has long been seen as the enemy and is, in fact is linked to hypertension, but in reality salt is not only relatively benign but is a nutritional goldmine. The real problem is the refined and processed table salt we are used to eating every day, the one used in almost all processed and packaged food.

Non- refined natural salt is important to many biological processes, including:

Natural salt consists of other naturally occurring minerals, including trace minerals like silicon, phosphorous, and vanadium, the remaining 2% of processed salt is comprised of man-made chemicals, such as moisture absorbents and a little added iodine.
More than 80% of the salt most people consume is from processed foods, the salt added to these convenience foods is mostly sodium, as opposed to natural salt, which is much lower in sodium.

Himalayan salt is very special, it is completely pure, having spent many thousands of years maturing under extreme tectonic pressure, far away from impurities, so it isn’t polluted with the heavy metals and industrial toxins of today.

It is important to mention that hypertension is actually promoted more by excess fructose than excess salt.

The amount of salt Americans eat pales in comparison to the amount of fructose they consume on a daily basis, sugar/fructose, rather than salt is the major driving force behind our skyrocketing hypertension rates, since it is well known that excess dietary sugar and refined carbohydrates can set you up for developing cardiovascular disease.

From: Home Remedies from a country Doctor from Jay Heinrichs, Dorothy Behlen Heinrichs, and the editors of Yankee Magazine, 2013.
From: Natural Remedies for Healthy Living , The Readers Digest Association,2011
From: The Illustrated Encyclopedia of Healing Remedies, C. Norman Shealy 2002
Edited 8/12/14 SCD
Sign in
Welcome! Log into your account
Forgot your password? Get help
Password recovery
Recover your password
A password will be e-mailed to you.
© Newspaper WordPress Theme by TagDiv