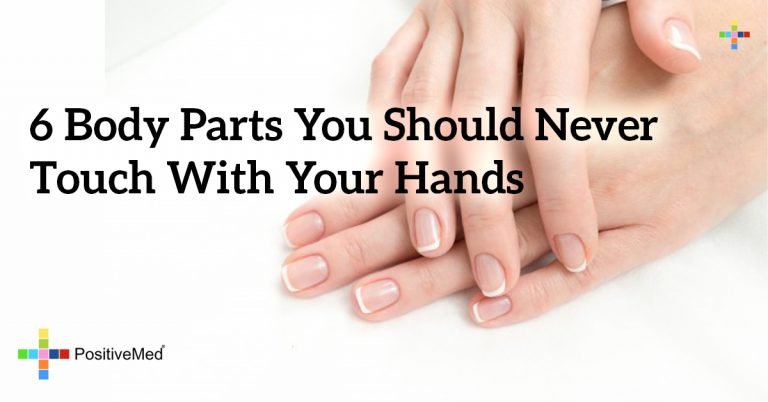 6 Body Parts You Should Never Touch With Your Hands

Body parts we like to touch . It’s a great way to gather information on an object. However, sometimes it’s not necessary. Take your body for instance. Chances are you know yourself in and out, so why do you keep putting your hands all over it?

According to new research, the hands are bursting with germs and microbes that get spread around your body as you bring your fingers to different places. This becomes even worse, says the University of Nebraska, when fingernails are kept two millimeters or longer.

That being said, you will inevitably have to scratch an itch. That’s why research has helped us identify the danger zones that you should always try to avoid touching.

The Underside of the Nails
Believe it or not, under your nails is a hotbed of bacterial growth. Including staph, lots of nasty little bugs live under there, waiting for the right time to transfer themselves to a place on your body where they can start to do some real damage. To prevent this, keep nails short and only clean the underside with a gentle nail brush. Picking at it creates trauma that can even lead to the nail detaching itself from the nail bed.

The Face
Acne is supposed to come to a halt after we leave our teenage years. However, fingers contain oils that plug up the pores, resulting in a continued streak of unwanted bumps. In addition, those that touch their faces tend to get sick more often due to the increased number of germs they inadvertently transfer to bodily openings. Including the eyes, mouth and nose, germs transferred to the face have no problem finding a way in.

The Butt
Believe it or not, there are those out there that enjoy a good butt pick. Whether because there’s an itch or for some other reason, touching the butt is one of the most destructive habits you can choose to pursue. According to Jared W. Klein M.D., Ph. D., the anus is a breeding ground for potentially harmful bacteria. However, if you can’t resist the urge, the least you can do is wash your hands immediately after to prevent the spread of whatever it is that lives down there.

The Mouth
We love putting things in our mouths, even if it’s not food. Maybe that’s why UK researchers found that people put their fingers around or on their mouths a stunning 23.6 times per hour. While it’s clearly a common thing, it’s not necessarily a good thing. According to the Journal of Applied Microbiology, a full third of all the germs found on the fingers were transferred to the mouth. Do that 23 times per hour, and you’re looking at an almost 100% chance that every nasty thing living in your finger will find its way to the main entrance of your body.

The Eyes
Though not really considered a way into the body, the eyes are far more giving that you would think. Unlike the mouth that has a long, cavernous entrance complete with spit and other deterrents, the eyes are far less protected from microbial invaders. Professionals suggest avoiding the eyes at all costs unless there are contacts to be put in or a speck of dust that needs to be rubbed out. Unchecked eye scratching with dirty fingers can lead to the dreaded pink eye or worse.

The Ears
Another little considered entrance to the body is the ear canal, but not touching them is for different reasons than simply adding germs to the ear wax mix. Should you stick anything in your ears, you run the risk of tearing the delicate skin that lines the inside of your ear, something that would allow those tiny invaders direct access to your bloodstream.

Touching our body parts isn’t something we can just do away with. When it comes to touching your own body parts, remember to be clean about it. Billions of tiny invaders are trying to worm their way into you, meaning the best protection you can give yourself is to always wash your hands and avoid touching these body parts as much as possible.