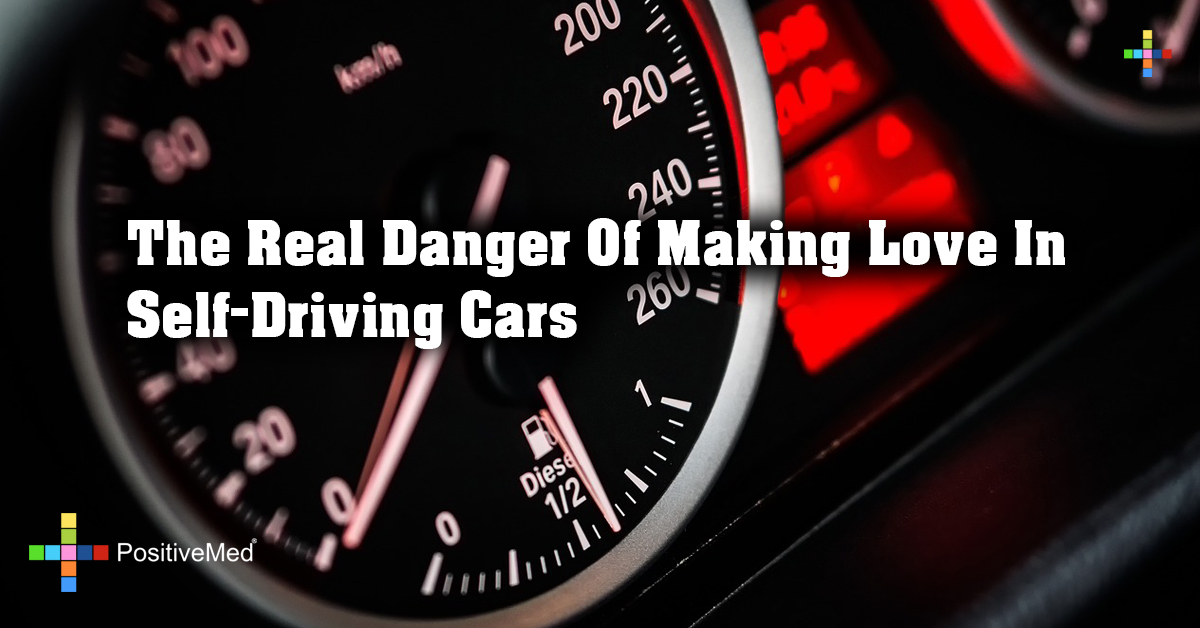 The Real Danger Of Making Love In Self-Driving Cars

[nextpage title=”…”]
Once upon a time, if you wanted to steam up the windows a bit, you had to pull up the closest kissing rock on Google Maps, kick on some sweet tunes via Bluetooth on your smart phone, and keep it PG during the drive.

Okay, so maybe that exact scenario doesn’t crop up often, but soon, it might never happen again. As we move further and further in the direction of self-driving cars, handing the wheel off to a computer might just mean things heating up a bit in the back— or even front— seat. Barrie Kirk from the Canadian Automated Vehicles Centre of Excellence had this to say on the subject: “I am predicting that, once computers are doing the driving, there will be a lot more lovemaking in cars… That’s one of several things people will do which will inhibit their ability to respond quickly when the computer says to the human, ‘Take over.'”

While it sounds like a pretty absurd concern on its face, distracted driving is a major cause of concern today that autonomous cars seek to eliminate.

RELATED ARTCLE:  Lovemaking in a Car: 9 Things to Consider Before

Currently, Tesla and other automakers don’t offer completely autonomous cars. Instead, their autopilot features are billed as driver assistance, meaning that, though the driver isn’t acting explicitly, their attention is implied. If, in an emergency situation, the car requests the driver take over, the person in that seat needs to be ready to act or they risk contributing to a car accident. But even with these constraints constantly stressed by car manufacturers, videos abound on YouTube of Tesla drivers occupied with questionable tasks, from reading newspapers to brushing their teeth; some even show their drivers sitting in the back seat, much too far from the wheel to respond in an emergency. Still further videos reveal flaws in the car’s autopilot system, especially with how it responds to changes in road markings, making it abundantly clear that distracted driving is still entirely unacceptable even in “self-driving mode”.

RELATED ARTICLE: THIS IS WHAT HAPPENS DURING $EX IN THE HUMAN BODY

But as of yet, there are no laws regulating these so-called self-driving cars. For Transport Canada, building a regulatory framework meant gathering a wealth of briefing notes for Transport Minister Marc Garneau, much of which highlighted potential concerns. The Canadian Press obtained said notes under the Access to Information Act, which detailed much apprehension: “The issue of the attentive driver is … problematic,” wrote one official in a string of emails concerning Tesla’s purported “self-driving” car. The note continued: “Drivers tend to overestimate the performance of automation and will naturally turn their focus away from the road when they turn on their auto-pilot.”

This is especially troublesome now, during what is referred to by Kirk as “phase one” of driverless car development, when the cars are not fully autonomous and do still require a human. Though the Tesla’s limits are already being pushed by drivers, like the three men who drove a Tesla Model S P85D from California to New York using autopilot 96 percent of the time, the cars are by no means ready for complete control to be handed over to the computer. A driver still needs to be present and attentive, but when two people are alone together and the car appears to be driving itself safely enough, well… “It’s human nature,” Kirk stated. “Once people get really comfortable with the technology and you’ve got two people in close proximity to each other, and one is supposed to be watching what’s happening and being ready to take over the driving if required, but if these people engage in lovemaking, which will happen more than it does now … that does compromise the person’s ability to take over if there’s an emergency and the computer says to take over.”
[/nextpage]