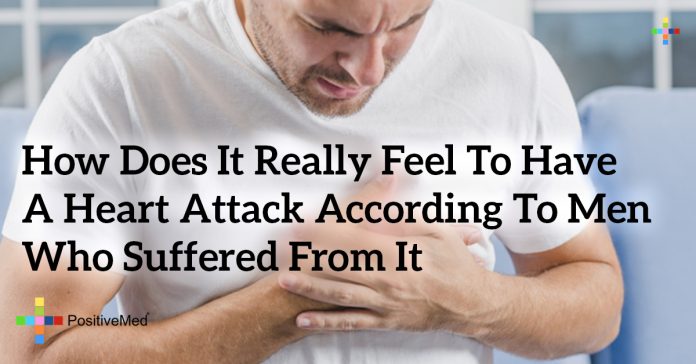 Physical symptoms will warn a person of a heart attack.
Is this true?
Lee began to feel breathless when he was walking his customary three-quarters of a mile to work. He thought it might be due to the onset of a minor respiratory complaint. Later, while climbing stairs to his apartment, he again lost his breath. He ignored that. Being winded on stairs is common once in a while.

Once inside, he began answering emails, but suddenly felt nauseous. That’s when pain gripped his chest.
Lee still didn’t get it. He’d passed a recent physical with flying colors, didn’t smoke or drink, never touched drugs. Even so, he did casually google up the symptoms of a heart attack.

The research surprised him, and he set out for the hospital. Luckily, he made the trip. By the time he arrived he was breathless, pale, sweating and in severe chest pain. Examination revealed a heart attack.
Lee was rushed to surgery and a stent placed to unclog the blockage.

If I get in shape, I won’t need to worry about a heart attack.
Is this true?
Paul did everything right. He changed his ways and body shape at the age of 40. He went vegetarian, gave up drinking and smoking, did yoga and lost 50 pounds with his new lifestyle. When he did that, his high cholesterol levels dropped to normal. That’s why, when he woke up on a Sunday with neck and triceps pain, he thought maybe he’d overdone it at the gym.

Later, he began to feel strange fatigue and a creeping dread. After all, he considered, he had some new stresses. He had a new baby, a new work project and a puppy. While walking the new puppy, Paul began to feel clammy and dizzy. Like Lee, he researched heart attack symptoms on his phone, for curiosity’s sake. He noted that chest pain is a common indication of a heart attack. Paul relaxed. He didn’t have pain.

Paul’s wife saw the situation differently, and insisted upon getting him to a hospital.
Paul was discovered to have a large part of his right coronary artery completely blocked. A tube was inserted through his groin and a stent placed. Paul made an uneventful recovery with only slight heart damage.

Heart attacks are for old people.
[/nextpage] [nextpage title=”…”]
Is this true?
Ted was driving home from a sales call. He felt a burning right below his sternum, but, like most people, he put it off as indigestion. He did his usual routine at home, but took a bath. He thought this would cause the symptoms to abate. They did, until he sat down in his rocking chair and passed out.Ted was only 42 years old.

By the time paramedics arrived, His heart had to be shocked into action. The defibrillator battery was practically drained by the time he responded and could be moved. Ted survived, but not without debilitating symptoms and having to reduce his work hours.

As we can see from the experiences of Lee, Paul and Ted, heart attacks can seem a lot like everyday complaints. Some people report common gerd symptoms. Others imagine they have the flu, while certain individuals feel the grinding of gears in their chests.

Heart attacks are not completely preventable at present. That is why depression is three times more prevalent in people who have experienced heart attacks than persons who have not. Heart attacks surprise many people, especially if they are young and relatively fit. They played by the rules, and still seemed to lose.

However, playing by the rules with lifestyle changes can decidedly lower risks and provide a better recovery should a heart attack occur.

Here are some simple tips for prevention.

The proper program to lower heart attack risk is not the cure for all heart attacks. Lifestyle changes provide people with purpose and a strong opportunity to prevent or alleviate circulatory disease.
[/nextpage]