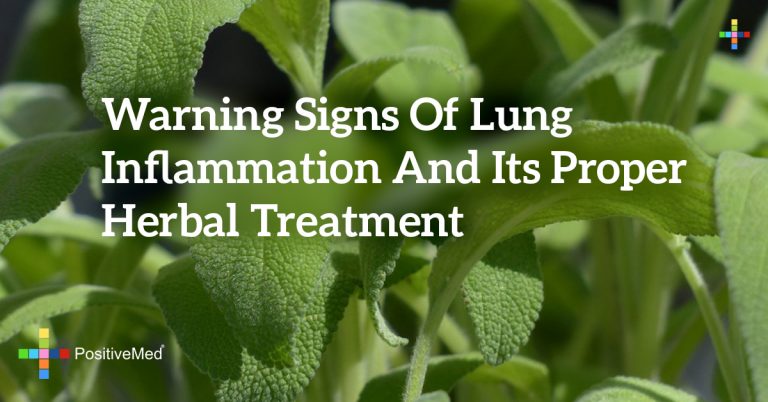 Warning Signs of Lung Inflammation and Its Proper Herbal Treatment

[nextpage title=”…”]
The warning signs of a lung infection include wheezing, coughing, chest tightening, and shortness of breath. Further signs include rapid heartbeat, fingernails and lips turning blue or gray, muscle aches, and chest pains. You can get herbal relief from the symptoms by using Eucalyptus, Lungwort, Lobelia, and Elecampane. You can also use Peppermint Rosemary, Sage, and Thyme.

• Asthma
Asthma is a recurring respiratory illness that causes breathing difficulty due to obstruction in the bronchial tubes or air passage. The airway gets tightened because of an infection. Statistical data from the Center for Disease Control (CDC) states that one in 14 people have asthma.

The CDC further reports that 24 million individuals in the United States of America have asthma. The data calculates to 7.4 percent of adults and 8.6 percent of children who get infected with the respiratory disease. If asthma does not get treated, it could be deadly.

• COPD
Chronic Obstructive Pulmonary Disease (COPD) is a disease that gets brought on by breathing difficulties. It occurs in stages, and it gets more severe over time. The person infected with the illness tends to cough up large amounts of mucous.

According to the National Heart, Lung, and Blood Institute, the leading cause of COPD is cigarette smoking. The infected individual could have been a long time smoker, or someone could have gotten exposed to second-hand smoke. Other factors of COPD include long-term exposure to air pollution, chemical fumes, or dust.

According to the COPD Foundation, 24 million people in the United States of America have COPD. That statistical data further states that more women get affected by the disease than men. Of the 24 million people reported to have the illness, 6.7 percent are female, and 5.2 percent are men. The COPD Foundation further states that COPD is the third leading cause of death in the United States.

RELATED ARTICLE: 9 COPD Warning Signs You Probably Confusing With Tiredness and a Headache

How to Recognize the Signs of Lung Infection

According to the Mayo Clinic, if you are experiencing wheezing that is frequent and recurring, it could mean that you have asthma. Additionally, if you have trouble breathing, and you find yourself coughing uncontrollably, you could have asthma. Other signs for which to look out are tightening of the chest; the symptoms get worse at nights, or if the cold air triggers symptoms.

According to Dr. Byron M. Thomashow, you will know if you have COPD if you have shortness of breath while going about daily activities. The activities include getting dressed, walking down the stairs, or going shopping. Furthermore, if you find yourself coughing more frequently, and it sounds like a smoker’s cough, you could have COPD. Additionally, your chest will tighten, and you will also feel like you are not able to take deep breaths.

According to Dr. Edward Group, you can treat lung infections with herbal medicines. The following herbs get used to treating respiratory problems.

• Eucalyptus
You can find the ingredient of this herb in cough drops. It supports the immune system as well as soothes a sore throat. Place a drop of the oil in your tea, or eat lozenges that contain the herb.

• Lungwort
This herb gets used for breathing conditions, and it helps to break up the mucus in the lungs. Take two of the capsules as soon as symptoms occur.

• Lobelia
This herb gets used to make the mucus thin and breaks up congestion. Take one capsule per day.

• Elecampane
This herb gets used to getting rid of excess mucus from the lungs. Use one teaspoon of the herb per one cup of boiling water.

• Peppermint
This herb gets used to ease lung infections. Place one drop of the oil in your tea.

According to the hearty soul, the following herbs get used to treating respiratory problems:

• Rosemary
This herb gets used to address respiratory infections. Drink it as a tea.

• Sage
This herb gets used to treat a sore throat and coughs. Drink it as a tea.

• Thyme
This herb gets used for chest congestion. It is also a powerful antiseptic. Drink it as a tea to eliminate bacteria.
[/nextpage]