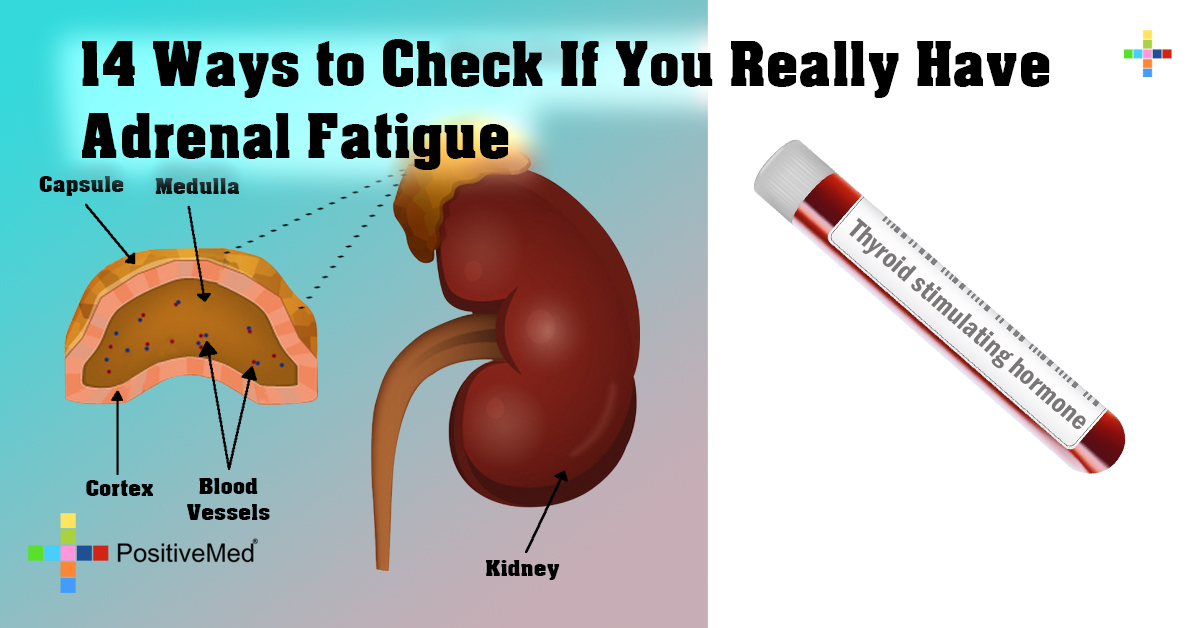 14 Ways to Check If You Really Have Adrenal Fatigue

A person who feels tired all the time no matter how much they sleep, who feels that they simply can’t cope with the normal, day-to-day strains and stresses of life and who lacks interest in things that used to give them pleasure may be suffering from adrenal fatigue.

What Is Adrenal Fatigue
Adrenal fatigue happens when the adrenal glands are stressed to the point where they don’t do their job of releasing stress hormones into the body as effectively as they could. These hormones include epinephrine, cortisol and DHEA. These hormones help to control the body’s immune system and heart rate. This leads to a wide range of symptoms that stops short of the life-threatening condition of the adrenal glands called Addison’s disease.

People who are most likely to develop adrenal fatigue are those subjected to increased levels of stress, including that caused by injury, poor diet, drug abuse and conditions such as pregnancy.

Though there isn’t one diagnostic test to determine whether a person has adrenal fatigue, there are tests that can help a doctor make a diagnosis in conjunction with the patient’s symptoms.

RELATED ARTICLE: What Is Addison’s Disease and Who Is at Risk?

1. Cortisol Saliva Testing
This test checks the levels of adrenal hormones found in the saliva. It is conducted at least four times over a 24 hour period. This is because cortisol levels vary over the course of a day.

2. ACTH Challenge Test
In this test, the doctor measures the patient’s adrenal hormone levels, then gives them an injection of adrenal corticotrophic hormone, or ACTH. This hormone stimulates the adrenal glands to secrete stress hormones. The doctor then checks the levels of hormones the adrenal gland secretes. If they are lower than normal, adrenal fatigue is suspected.

3. Thyroid Function Tests: TSH Test
Though the thyroid and adrenal glands seem to have nothing to do with each other, they are part of the endocrine system. It is difficult for one gland to function well if the other gland is compromised. Thyroid stimulating hormone, or TSH stimulates the thyroid to produce T3 and T4 hormones. A person who is suffering from adrenal fatigue tends to have higher levels of TSH.

4. Free T3 Hormone Test
Though this test is not commonly performed, it can still give a doctor a clue to their patient’s adrenal health. Checking the T3 hormone tells a doctor how the thyroid is working.

5. Free T4 Hormone Test
The T4 hormone is produced in much greater amounts than the T3. Low levels of this hormone are linked to an increase in the thyroid stimulating hormone.

6. Total Thyroxine
This test is used in conjunction with the free T4 test. The thyroxine test not only measures free T4, but the T4 that is fixed to carrier proteins.

7. Ratio of Cortisol to DHEA Test
The ratio of these hormones to each other can tell the level of adrenal fatigue.

8. Ratio of 17-HP to Cortisol Test
People with adrenal fatigue tend to have a higher ratio of 17-hydroxyprogersterone to cortisol. 17-HP is used to make cortisol, and a high level means that the adrenals are having trouble converting it.

10. Pupil Contraction Test
Some doctors believe that fatigued adrenal glands can even affect how the pupil contracts in response to light. During this test, a person sits in a dark room and a flashlight in shone into their eye. If their adrenal glands are fatigued, the pupil won’t be able to maintain its contraction for more than two minutes.

12. Blood Test
A doctor draws the patient’s blood to check levels of cortisol, ACTH, potassium and sodium in the blood. Antibodies that are connected to Addison’s disease may also be checked.

RELATED ARTICLE: How Often Should you Have Blood Tests?

13. Hypoglycemia Test
If doctors believe that the pituitary gland is the cause of the adrenal fatigue, they may inject the patient with insulin then check their levels of blood glucose and cortisol throughout the day. High glucose levels and low cortisol levels are a sign of adrenal fatigue.

14. CT Scan
A CT scan can allow a doctor to look at the size of the adrenal glands. An MRI may also be used to look at the patient’s pituitary gland.

These fourteen tests are helpful in diagnosing adrenal fatigue. In severe cases, a doctor may have their patient take bioidentical hormones such as oral or injected corticosteroid. The patient may also benefit from getting a good night’s rest, increasing their salt intake, adopting a diet that is free of foods the patient is sensitive to, and to take supplements such glutamine.