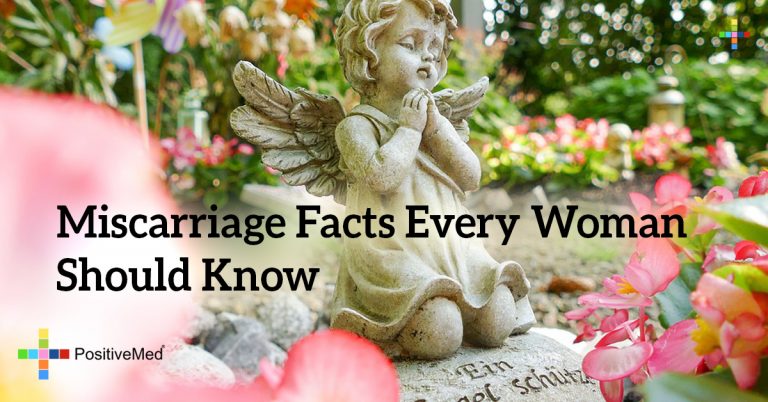 Miscarriage Facts Every Woman Should Know

Miscarriage, otherwise known as spontaneous abortion, is the natural or impulsive expulsion of a fetus from the womb before it is viable. At least 80 percent of all miscarriages occur within the first trimester of pregnancy. About 20 percent of all known pregnancies end in miscarriages. May women don’t know when they miscarry because they never realize they are pregnant. Chromosomal defects, immune disorders and hormone problems are some of the causes of miscarriage. Being pregnant and giving birth is possible even after a miscarriage.

Types of Miscarriage
A miscarriage is considered inevitable if bleeding is accompanied by contraction of the uterus and widening of the cervix. Other types include missed, incomplete, complete and threatened miscarriages.

Signs and Symptoms of Miscarriage
Vaginal bleeding or spotting; passage of fluid or tissue through the vagina; abdominal pain; and lower back pain are signs and symptoms of miscarriage. Other symptoms include weakness, severe cramps and fatigue.

RELATED ARTICLE: This Common Health Problem May Put You At Higher Risk For A Miscarriage

Causes of Miscarriage
Abnormalities with the baby’s genes or chromosomes are the common causes of stillbirths. The defects include intrauterine fetal demise, a situation where the fetus dies even before the mother knows that she is pregnant; blighted ovum, where the embryo doesn’t form; and in rare cases, molar pregnancy, which is the development of a benign tumor in the uterus. These abnormalities are usually unrelated to the mother. An incompetent cervix may fail to support pregnancy, resulting in a miscarriage as well. Less frequently, hormonal problems, infection, uterine defects, physical problems and underlying medical conditions, such as uncontrolled diabetes, may cause miscarriage.
[/nextpage] [nextpage title=”…”]
Risk Factors
A personal history of more than two consecutive miscarriages, weak cervical tissues, uterine defects and being underweight or overweight may predispose a person to spontaneous abortion. Undergoing invasive prenatal genetic tests, including amniocentesis and chorionic villus sampling, as well as using illicit drugs, smoking and drinking too much alcohol during pregnancy may also render a woman vulnerable to miscarriage. Women who are at least 35 years old have higher chances of miscarrying.

Tests, Diagnosis and Natural Treatment
Physical examination, pelvic exam, blood tests and ultra sound may help provide diagnosis.
Resting may help in reducing pre-and post-miscarriage symptoms. As of 2016, there are no approved complementary or alternative therapies for the problem.

Complications
Complications include bleeding and uterine infection, and they may be accompanied with chills and tenderness in the lower abdomen.

After Miscarriage
Research shows that more than 80 percent of women who have miscarried previously conceive and give birth normally. Diagnostic tests may help determine the exact cause of the problem if still births occur two to three times consecutively; habitual abortion Experts may recommend birth control pills for such cases.

Bleeding may indicate possible miscarriage; however, it is still possible to carry a pregnancy successfully to term. Intercourse, working with no exposure to radiation or harmful chemicals and exercise don’t directly cause miscarriages. Women who experience any of the aforementioned warning signs or miscarry at least two times consecutively should contact their doctors.
[/nextpage]