Why Vitamin B12 Shots Become Very Popular And How To Know If You Need One? 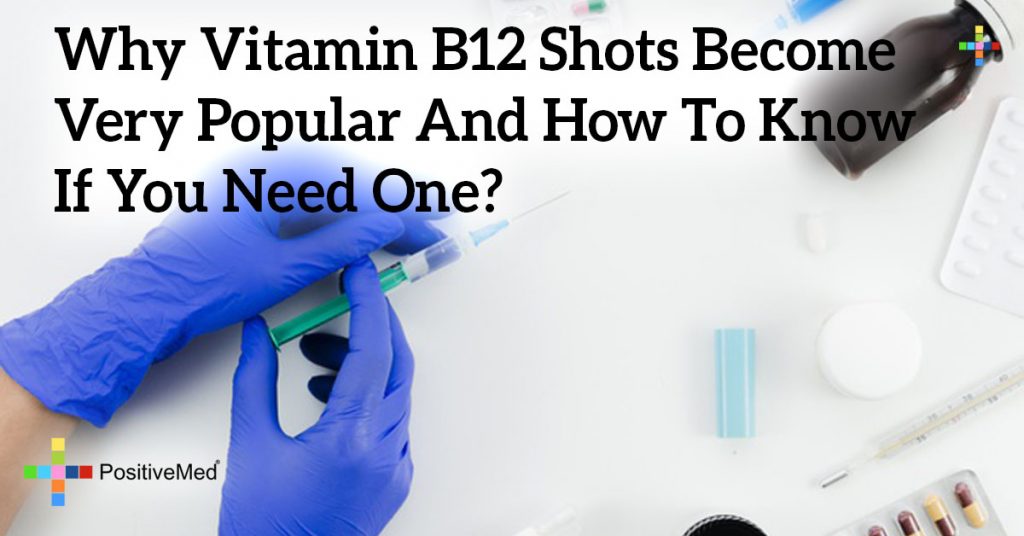 One of the most important vitamins that people can take today is B12. It is a vitamin that has a wide variety of benefits that helps to produce good health when sufficient amounts of it are taken. When the human body is deficient in this vitamin, there are obvious problems – mentally and physically – and breast cancer in women is one of them. Getting a boost from a vitamin B12 shot seems to be becoming more popular. Not only do average people get them, but also some celebrities make sure they get a dose frequently. The injection not only can provide a boost of energy, but there are also a number of other health reasons why you might also be able to benefit from it, too.

Vitamin B12 is a vitamin that comes from meat and a few plants. It is also produced in the intestines and then transported through the body where it can do its important work. Some people need vitamin B12 to be supplemented because their body does not produce enough.

Although vitamin B12 can be taken orally as a pill, stronger doses are given by a doctor as an injection. This provides a larger dose of the vitamin, and its effects and benefits are seen almost immediately.

Getting a boost from a vitamin B12 shot seems to be becoming more popular. Not only do average people get them, but also some celebrities make sure they get a dose frequently. The injection not only can provide a boost of energy, but there are also a number of other health reasons why you might also be able to benefit from it, too.

Vitamin B12, or cobalamin, has a very powerful effect on the human body and is essential for many of the body’s daily functions. This includes the proper formation of red blood cells, cell reproduction, nerves, DNA synthesis, proper brain function, and it helps to break down fats and proteins. In the brain, vitamin B12 aids in the formation of the neurotransmitters and also works to limit homocysteine, which can have a negative impact on brain function. More vitamin B12 reduces the amount of homocysteine, enabling the individual to have better brain function and feel more positive.

Signs of B12 Deficiency

It does take a while for an individual to run low on B12 if they are eating healthy because the body does store it – and lots of it. Certain medical conditions and medications may prevent the proper absorption of sufficient amounts of vitamin B12, which may lead to an eventual deficiency.

Once the supply of B12 starts to run low, there are many pieces of evidence that an individual may have a deficiency of the vitamin. The National Institutes of Health says that the symptoms may include:

RELATED ARTICLE: How To Recognize Early Signs Of Dementia And Prevent Memory Loss

The Benefits of a Vitamin B12 Injection

The main reason that people will often get a vitamin B12 shot is to get a boost in energy. For people who are deficient in B12, this will most likely have that effect. Mayo Clinic, however, says that for people who are not deficient, it is unlikely to give an additional boost.

For those who are deficient in the vitamin, other benefits include:

• Weight loss – possibly because of increased metabolism and more energy to move around.
• Lift the mood – the vitamin is often given to help people who are depressed to feel better.
• Provide better brain function – people who are suffering from a mental fog, poor coordination, and memory loss, the vitamin can help them to have better mental functioning.

People Who Can Benefit the Most from a Vitamin B12 Injection

Some people are not able to absorb vitamin B12 through their intestines, which is where most people get what they need. Medically, the people who will benefit most from getting vitamin B12 injections are those who are deficient in the vitamin. This can be caused by pernicious anemia, which is a problem in the intestines that means that the body will not be able to absorb much B12 from the diet. Other health issues can also cause insufficient levels of B12, such as celiac disease, disorders of the pancreas, inflammatory bowel diseases, and those who have had stomach surgery.

Another group that can benefit from this shot is seniors. The National Institutes of Health (NIH) says that people over 50 naturally have lower levels of the vitamin as a result of natural aging. Vegans and vegetarians can also benefit from supplemental B12 because they will not get it from a purely vegetable diet.

A vegan diet has tremendous benefits. In order to get its full benefits, it’s recommended that vegans do ONE of the following:

According to MSN, about 40 percent of people over 60 have a vitamin B12 deficiency. The reason for this is because it becomes increasingly harder for their body to absorb it. This may also result in anemia.

Several studies, the Mayo Clinic reports, have revealed that women that have breast cancer also tend to have lower amounts of vitamin B12 in their blood. Other studies have also shown that there may be a protective effect against breast cancer with the vitamin. Older women were only given some cancer protection by the vitamin at higher levels.

Vitamin B12 also helps to protect the integrity of DNA. Both vitamin B12 and folate are needed for this important task, which helps ensure that DNA is not being altered as copies are made. When the protection for DNA is not there, cancer can start to develop.

B12 and Weight Loss

If you find that you have low energy levels and have a hard time to get moving, a vitamin B12 shot may be just what you need. Many people testify that a B12 shot energized them. It could help you get the energy and motivation you need to help with weight loss.

Osteoporosis has also been linked to low amounts of vitamin B12. Since people older than 60 tend to naturally have lower concentrations of the vitamin, you can maintain a better level with a quick shot of it.

After You Get a Vitamin B12 Shot

Going to a doctor and getting a shot of vitamin B12 will produce several quick results – if you are deficient in the vitamin. The first thing you will experience is a quick burst of energy. Then you may feel stronger and healthier, and you may also feel an increased sharpness and clarity in your mind. There are almost no side effects from a B12 injection.

Getting a boost in your energy levels and some help with protection for breast cancer can be a great way to feel good again. You will need to go to a doctor for a brief consultation and prescription, and then walk out of the doctor’s office ready to take on the world.

Who Should Not Get an Injection

Certain people should not get a vitamin B12 injection. An injection contains the synthetic form of B12 called cyanocobalamin, which is made from cobalt. If you are allergic to either substance, you should not get an injection. Also, if you have Leber’s disease, are pregnant or nursing, or are trying to get pregnant, you should avoid this shot, says Drugs.com.

Some natural sources of Vitamin B12

There are several common sources of vitamin B12. Most people do get enough in their diet, but the Framingham Offspring Study found that as many as 39 percents may be in the “low normal” range. Sources include:

Vitamin B12 may be able to give you a real boost in your energy levels, particularly if you are deficient in the vitamin already. You will need to have a prescription in order to get it. Some people may need ongoing injections, depending on various health conditions. There really is not much of a concern of getting an overdose, so an excess is not apt to produce major side effects in most people.