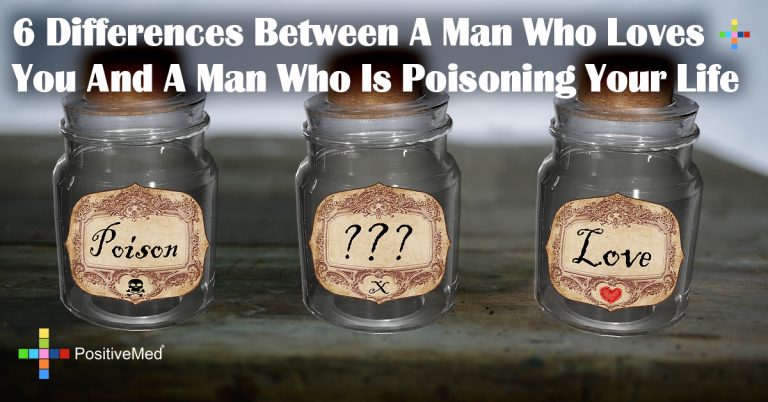 Love is hard to find, and it’s even harder to know whether or not it’s real when your feelings cloud your judgment. However, deep down we all have that voice in the back of our head that won’t shut up. We convince ourselves its fear, and maybe sometimes it is, but if you really do wonder whether or not the man you’re with is there for the right reasons, then take a look at these six differences between a man who loves you and one who is poisoning your relationship and wasting your time.

A man who loves you will respect you and admire you for your strong opinions. On the opposite end of the spectrum are men who will tell you that you’re wrong or agree to let you think what you want without believing that your opinion is as equally valid and important as theirs, no matter how different the two may be.

Men who love a woman want her to be the best version of herself. He’ll encourage her to pursue new opportunities and experiences. He may introduce her to plenty of new things, but he’ll never force her into something she’s uncomfortable with or make her feel bad about herself for not doing something he wanted her to.

If you ask him how you look in a pair of jeans and he says you should change, that doesn’t mean he’s evil or thinks you’re gross. Would you honestly want him walking around in a shirt that didn’t fit properly?

Men who love women will tell them what they need to hear. The truth may sting a little in certain situations, but his words never should. A man who tells you to lose weight insults the things you like, your style or anything else about you doesn’t do so out of love; he does it because he doesn’t respect you and knows he can get away with talking to you that way.

RELATED ARTICLE: 8 Signs He’s NOT Serious About Your Relationship

Now we’re moving into a different territory where your man may text, call and want to be with you 24/7. Some women might think that sounds great, but constantly checking up on you and needing the reassurance of their place in your life is a sign he’s in this more for himself than for you. A man who loves you will certainly let it show both emotionally and physically, but a man who is clingy just has emotional issues and wants to talk to you so he feels validated, not so you feel good.

This continuous the misleading actions that come off one way but are actually something else entirely. It’s natural to protect something you care about, so if he keeps you in close sight and his arm around your shoulders while you two are out at the club, great. If on the other hand, he refuses to let you go anywhere alone or starts fights with men who try to talk to you, he’s possessive and, like a dog uses aggression to defend what’s “his”.

A guy who is interested in you will talk to you when the times are convenient for him. If the relationship is brand new, this is to be expected. After all, no one drops what they’re doing to text incessantly with a girl they met two weeks ago. But if you two have been official for a while and he still only seems to talk when it’s good for him, then chances are he’s not in love, even if he does use the “L” word. Men who are in love will make serious commitments and efforts. When they make plans, they adhere to them. When they say they’ll do something, they follow through. Mr. Right is not anything like Mr. Right Now, and you’ll know that when you take a step back and truly analyze your relationship, your interactions and your overall level of happiness.