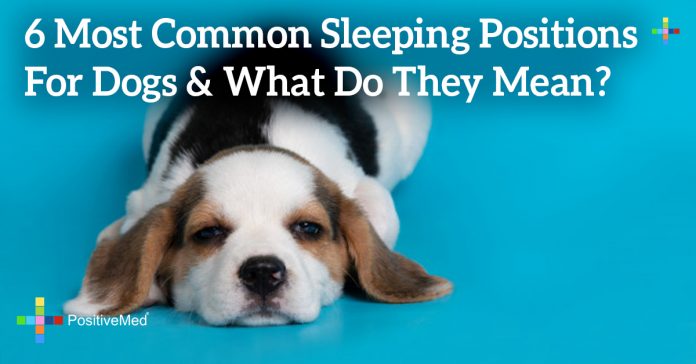 6 Most Common Sleeping Positions For Dogs & What Do They Mean?

Much like their humans, dogs’ health depends on the quantity and quality of their sleep. Especially during the puppy years, sleep is an important part of their overall development. Therefore, it is important to keep an eye out, even when your dog is sleeping. According to Texas A&M University, School of Veterinary Medicine and Biomedical Sciences disturbed sleep patterns in dogs can be a sign of disease or life-altering illness.

Sleep disorders in dogs include narcolepsy, cataplexy, and obstructive sleep apnea, with certain breeds more prone to particular disorders than others. To prevent sleep disorders from becoming severe, dogs can be placed on a diet to reduce body fat. In addition, the Texas A&M University Veterinary School recommends dietary supplements such as omega 3 fatty acids, vitamin C, beta-carotene, melatonin, flavonoids and even acupuncture, which have all been shown to promote improvements in dogs’ cognitive functions.

Thankfully, dogs understand the serious nature of sleep. On average, dogs sleep 12-14 hours and some may even sleep up to 18 hours per day. Throughout their naps, dogs rotate through several sleeping positions but often favor one in particular. While that favorite position can look comical or even uncomfortable, it does tell you something about your dog’s personality.

This is the most common sleeping position, with the dog sleeping on its side and legs stretched out in front. It is a peaceful, comfortable position, and shows your dog is low maintenance. This position also shows your dog is extremely loyal because it can jump into action the moment it hears a suspicious sound.

Many dogs sleep on their bellies, either with paws tucked underneath or stretched out in super-dog pose. These dogs are very energetic and ready for action at any time. Even though they sleep, the moment you call their attention, they simply push up all four legs for immediate action.

Dogs in the fox position curl their body and tail in a circle, with their paws neatly tucked underneath. This position is often used when the weather gets colder, and dogs naturally conserve their body heat. Sometimes, they even stuck their nose underneath their front paws or tail for full thermal effect. Dogs who sleep in this position are naturally easy-going, laid back, and all around gentle animals.

4. The Spooner
Multi-dog households can be home to spooners: dogs that sleep together, whether back to back or information. These dogs are affectionate and search out each other’s warmth during nap time. This position shows they easily bond with others, and are most comfortable with their pack.

5. The crazy legs
This position, you probably won’t believe until you have seen it with your own eyes. The best way to describe it is the “dead fly” position: on the back with one or more legs up in the air. Uncomfortable as it may sound, this is actually a very confident position. Dogs show trust when they lie on their backs for belly-rubs because this is a very vulnerable position. To sleep in this position shows a dog that is very confident and comfortable with themselves and within their home.

6. Passed-out
Much like some of their human’s college days (minus the alcohol, of course), passed-out dogs can sleep anywhere: with front paws on the couch and hind legs on the floor, in food bowls, in laundry room bins, in garages on top of tools. Anywhere and anything that will hold their bodies while they catch a few minutes (or hours) rest will do.