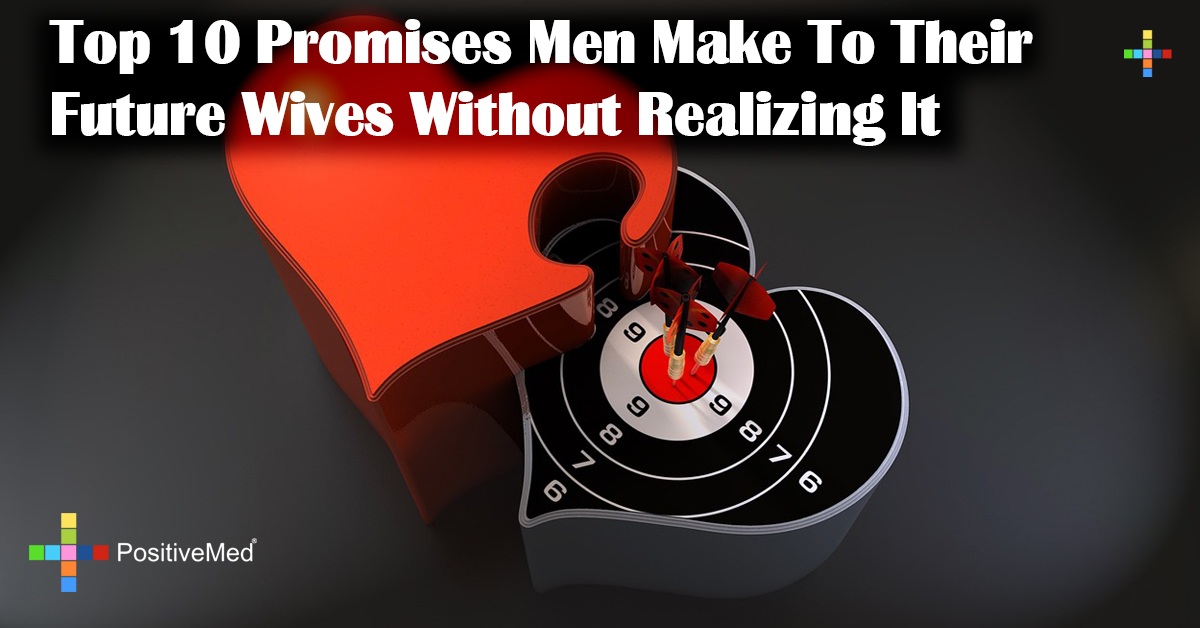 Relationships can be incredibly complicated if both people involved are not on the same page. Often, women are certain they are ready for marriage well ahead of the men they love. This can cause strain on the relationship because many women believe that if their significant other does not show signs of being interested in taking the relationship to the next step, it is because he is just taking advantage. This is not always the case, but there are definite ways to tell if your man is marriage minded. The following 10 items are things men generally discuss with women they intend to marry. If you have been in a relationship for a significant amount of time, and these topics have never come up, it might be time to ask your man outright – Are we ever going to get married?

Top 10 Promises Men Make to their Future Wives without Realizing it:

1.) Exclusivity – Easily the top sign that your man has marriage on the mind, and a definite must. If he is unwilling to be exclusive, there is a good chance he’s just not ready to grow up and be a husband. Better to know now, rather than after the fact. Some men will give into pressure and simply marry women their families approve of, but won’t stop going out and meeting others. Don’t even think about marrying a man who won’t make you his one and only.

2.) You’ll have children – Men only discuss children with women they can see as the mother of their own. If your man discusses plans for schools, names, or other important factors that come with having children, he definitely wants you to be his wife. There may simply be other factors preventing him from popping the question.

3.) Building a home together – Asking for your input on a future home means that your man intends to have you in his life for a long time. He might not be so obvious about the subject, bringing up topics like decorating, or even features of a home he’d like to own someday. Nevertheless, these discussions are reserved for women with whom men plan to build a life with.

4.) Making you part of his family – Though you may have been introduced to a man’s family before and had the relationship fall apart, a simple meeting and actually being integrated into the family are totally different. When you find yourself being invited to more family gatherings than ever, or even taken out by his sisters or cousins for lunch dates, it’s a sign that he might be about to propose.

RELATED ARTICLE: 5 Efforts Men Should Make In Their Relationships To Make Them Stronger

5.) What your wedding will be like – Proposing marriage can be an incredibly scary experience for men, especially when they are unsure of what the response will be. If your man casually mentions features of weddings that he’s been to or comments on the wedding of a friend or acquaintance, he’s likely testing the waters. Respond enthusiastically to any mention of weddings to show him that you’re ready to be asked. Sometimes a man will wait for months longer than he ever intended to, just because he’s afraid you’ll say no!

6.) His mother’s recipes – If you suddenly find yourself invited to help with the cooking before a family gets together, or if his mother shares recipes with you that she previously kept to herself, it’s likely because she knows her son is about to make you his wife.

7.) Plans for travel – Going on a big trip together is a hurdle most couples face prior to tying the knot. Your man will likely only think about traveling with you once he’s serious about the relationship and confident that you’re both on the same page romantically. CNN contributor Allison Pescosolido referred to trips taken as a couple as something which: “not only reveals your compatibility as a dating couple but ultimately how you will relate as a married couple.” Because traveling can be so stressful, it is a great test of how well you work together as a team.

8.) Concern for your health – Though too much coddling is bad for any relationship, only men who value your wellbeing and see a future with you will be overly concerned with your health. Men tend to be a little oblivious to women’s health concerns, so if your guy has questions or takes the time to make sure you’re comfortable when feeling under the weather, it’s because he loves you and wants to keep you healthy and happy for the long haul.

9.) Forming relationships with your family – Many women report that their husbands spent a lot of time with their relatives just prior to popping the question. This is because marriages are essentially the joining of two families. Pnina Tornai, star of the hit TV series “Say Yes to the Dress” says spending time with your family shows a man’s value on family.

When your man starts taking time out to spend time with your brothers or other relatives, it’s because he’s already starting to forge familial bonds that will last your entire marriage.

10.) Discussing retirement – Retirement and old is something young people rarely think about, except in situations in which they consider who will be next to them at that time. Your man bringing up retirement plans, or ideas about the not-so-near future is a sign that he expects you to be there with him.

Relationships are primarily about communication. If you are convinced that you and your man are not on the same page, talk to him. Rather than wondering about your future and security, a simple discussion combined with evaluating his stance on the previously mentioned items should be a surefire way to determine if wedding bells are in your future.