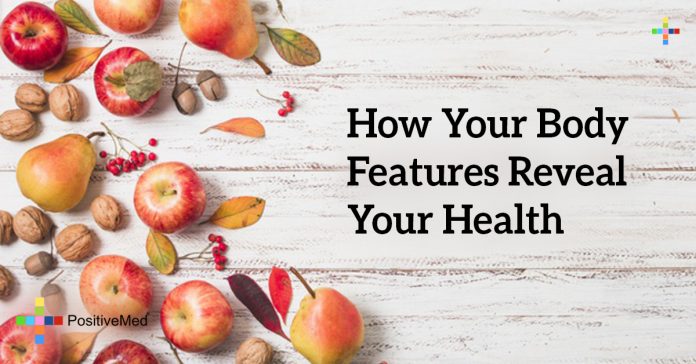 How Your Body Features Reveal Your Health

Doctors are using physical traits to identify a patient’s risk of developing certain chronic health conditions. While people have known about “apples” and “pears” for sometimes, researchers have begun learning that other physical traits like finger length can also indicate a patient’s susceptibility to certain conditions. Happily, none of the below indicators mean a person is doomed to get sick, providing they take care of themselves.

Body Shape
Body shape is an important indicator of health since it reflects the location and distribution of body fat. Doctors determine body shape by measuring a patient’s hips and waist and calculating the hip-to-waist ratio. The resultant body shape types are often called “apples” and “pears.”

An “apple” has a waist that is wider than their hips, which means they carry most of their body fat around their abdomen – and around vital organs. That increases the patient’s chances of developing diabetes, heart disease or stroke.

A “pear,” on the other hand, has a waist that is narrower than their hips. They carry most of their fat in their hips or thighs, so no organs are affected by close proximity to fat deposits. A “pear” is thus less susceptible to diabetes, heart disease, or stroke. On the other hand, a pear has a harder time losing weight than an “apple “ does.

Waist Size
Regardless of body type, a large waist increases a patient’s chances of developing a chronic disease. A healthy, average-sized man should have a waist no wider than 37 inches while an average-sized woman should not have a waist that is wider than 32 inches. Obviously, waist size is correlated to weight; an obese person is going to have a bigger waist than somebody of normal weight.

Height
A patient’s height can also indicate their susceptibility to certain conditions. In 2012, for example, researchers found that taller women were more susceptible to ovarian cancer than shorter women. Generally speaking, being tall increases the risk of developing cancer and diabetes. Short people are more susceptible to stroke, heart disease and Alzheimer’s.

RELATED ARTICLE: Find The Right Workout Based On Your Body Type!

Finger Length
Researchers have found that the lengths of a patient’s index and ring fingers can indicate both personality and risk of disease. During fetal development, a boy will experience a surge of testosterone in the middle of the second trimester. As a result, men usually have ring fingers that are markedly longer than their index fingers.

Having an index finger that is the same length as or longer than the ring finger increases a man’s chances of developing oral cancer. On the other hand, men with long index fingers are much less likely to develop prostate cancer, especially if they’re also under 60 years old.

Leg Length
Researchers at the Bristol University have found that women with long legs are likely to have heavier babies than women with short legs. Leg length indicates well-nourished someone was during childhood. Long legs indicate the patient enjoyed a healthy diet while growing up while short legs indicate the opposite. Short legs also indicate a greater susceptibility to liver disease.

Breast Size
A 2004 study found that women with both large breasts and narrow waists are more fecund than other women. The researchers also believe that men find women with this combination of traits attractive because they recognize their superior fertility.

Finger Nails
The condition of one’s nails can also indicate health, for various abnormalities of the nails are associated with certain health conditions. Small pits in the nails, for example, are seen in people with psoriasis or connective tissue disorders like Reiter’s syndrome.

Eye Color
Eye color can also indicate health. Scientists have learned that over a dozen genes are involved in eye color – and many of those genes affect other parts of the body. Researchers have found that women with light eyes have a greater pain tolerance than do women with dark eyes. People with blue eyes are more susceptible to alcoholism.

The main thing to remember is that while physical traits can indicate a patient’s susceptibility to a given condition, they do not mean they will definitely develop it. The patient simply has to take the appropriate preventive measures. For example, a man with an “apple” body type has to exercise and maintain a healthy diet in order to keep his waist below 37 inches. Doing so will improve his health and decrease his risk of developing a chronic disease.