PositiveMed The Positive Side of Medicine
Home health cancer Chronic Heartburn And Acid Reflux Might Be Early Sign Of Cancer. THIS Is What You Need To Know 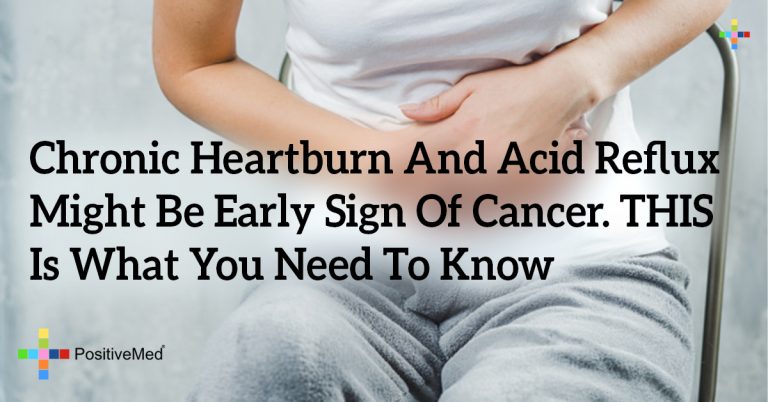 Chronic Heartburn And Acid Reflux Might Be Early Sign Of Cancer. THIS Is What You Need To Know

During a lifetime, most adults experience heartburn. A Heartburn is an uncomfortable burning sensation in the chest, just behind the breastbone. The pain often rises in the chest and can be felt in the throat, neck, or angle of the jaw. A heartburn is commonly associated with a regurgitation of an acid found in the stomach known as gastric acid. The acid digests the food we consume, but when it rises the esophagus, a burning sensation is felt.

Stomach pain is a dull ache in the stomach or cramps. It is usually short-lived, but it is a greater cause of concern when it becomes severe. Medical assistance should be administered especially if the pain is concentrated in a particular area.

Poor digestion is also referred to as dyspepsia. This is a condition characterized by failure of enzymes and acids down the digestive system to function properly. It is caused by some causes including; stress, microflora imbalance, bad eating habits, food allergies, sensitiveness among others. Poor indigestion results to constipation, diarrhea, and gas influx in the digestive system, and cramping bloating and low level of energy. In this case, the food ingested is not absorbed as required and therefore, the person suffering from this condition feels weak.

Stomach cancer is a disease where cancerous cells develop in the lining of the stomach. It can be attributed to an infection by a bacteria called H. pylori, indigestion among other factors according to the findings by researchers. It is a disease with no symptoms and it is often diagnosed at the advanced stage when symptoms arise.

RELATED ARTICLE: Make Your Body Fight Against Cancer And Many Other Diseases By Drinking THIS Alkaline Beverage

The above serious diseases can cause loss of lives. According to research, not all cancers can be prevented. However the prevalence of the disease can be prevented by avoiding risk factors such as;

Avoiding use of alcohol and tobacco; a change of lifestyle like quitting smoking or avoiding alcohol significantly reduces chances of getting the diseases.

In my opinion, a natural remedy to prevent heartburn and acid reflux is by being keen on how I eat, what I eat and when to eat and what I drink.

In conclusion, heartburns and acid reflux are manageable conditions and with proper nutrition and exercising they can happen less. However if they become chronic, it is importance to visit a physician.