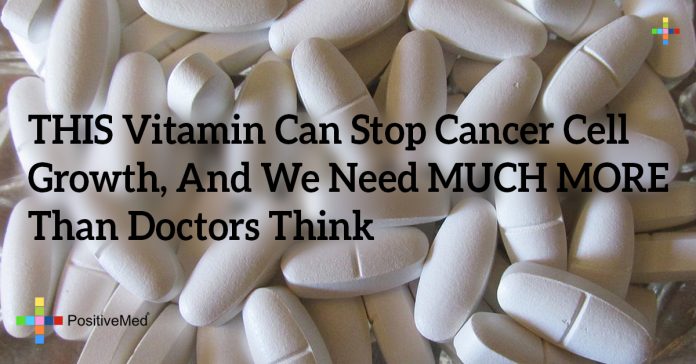 THIS Vitamin Can Stop Cancer Cell Growth, And We Need MUCH MORE Than Doctors Think

In the year 2015, there will be 1,658,370 new diagnoses of cancer in the United States alone. That’s a sobering statistic, especially when you consider that those are just new cases not including existing ones. While medical researchers still won’t claim that they have found a cure to cancer, they may have come pretty close with the newest discovery about an important essential vitamin.

Nearly 70% of American children do not get enough vitamin D and roughly 75% of U.S. adults don’t get enough of the “so-called ‘sunshine vitamin’.” This vitamin might not be so important if it weren’t for its role in preventing nearly every ailment from cancer to heart disease and even diabetes. An adequate daily amount of the nutrient is a healthy contributor to general health and increasing one’s intake may even be the missing link to the cure for cancer.

While the evidence isn’t entirely confirmed, there are several studies that have indicated that vitamin D has a unique link to cancer. One such study was conducted by Joan Lappe and Robert Heaney in 2007. The study included a group of menopausal women who were given enough vitamin D to increase their levels to 40 ng/ml. After just four years, these same women experienced a 77 percent reduction in the incidence of all types of cancer.

Research conducted by Dr. Cecdric Garland also suggested that vitamin D is intricately linked to certain types of cancer, particularly breast cancer. In fact, his research showed that an individual’s risk of breast cancer could be cut by 50 percent when an adequate level of vitamin D was achieved.

Research hasn’t established a causal relationship between vitamin D deficiency and cancer, but it is showing an undeniable link between the two. That may be because vitamin D is important for so many of the body’s functions. Vitamin D is essential for the body to absorb calcium and promote bone growth, but it also helps regulate the function of the cardiovascular system, autoimmune system, and other bodily systems.

With the current findings regarding vitamin D, the recommended daily allowance of the vitamin has been adjusted. Individuals ages 1 to 70 need 600 IU daily while infants 0 to 12 months need 1,000 IU daily. It’s best to try to get that amount from dietary sources, such as fatty fish, milk, yogurt, tuna, mushrooms, orange juice, and others as well as from spending some time in the sun. However, oral supplements are also beneficial, primarily in the form of vitamin D3. Supplements should be taken on a daily basis and take roughly 2 to 3 months to establish an adequate level of the nutrient in the body.

As much of a puzzle as cancer is, this vitamin D discovery may very well be the missing piece. Adequate levels of vitamin D in the body are not only beneficial for promoting bone and muscle health but also for reducing the risk of cancer.