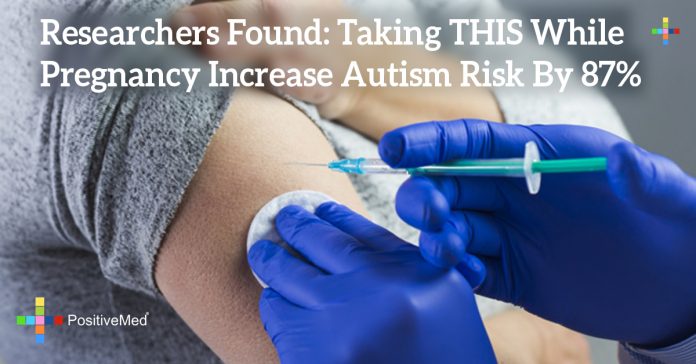 Researchers Found: Taking THIS While Pregnancy Increase Autism Risk By 87%

Every expecting mother wants to ensure that her child remains as safe as possible while still in the womb. There is an entire world of information out there about what is and is not safe for expectant mothers. However, new studies are popping up that are showing that something previously thought to be completely safe for pregnant women might not be so safe after all.

Many women take antidepressants. However, a groundbreaking new study from JAMA pediatrics has postulated that antidepressants taken by pregnant women could be a massive contributing factor in our rising autism rates.

“Researchers suspect that because serotonin is involved in numerous pre- and postnatal developmental processes, antidepressants that inhibit serotonin will have a negative impact on the ability of the brain to fully develop in-utero,” writes Research Gate.

Over the past five years, there has been a massive debate in this country as to whether or not vaccines could be responsible for the rise in our autism rates. At a first glance, it seemed like vaccines could very well be the culprit. After all, the vaccine schedule was increasing while the rates of autism were simultaneously rising as well.

RELATED ARTICLE:  Can Your Medications Be Responsible For Your Weight Gain?

However, there is a huge difference between correlation and causation. Although the two were rising at the same time, medical professionals have determined that there is absolutely no link between vaccines and autism rates. Regardless, many internet skeptics have continued their crusade to end vaccines, leading to tragic results. Cases of preventable measles outbreaks have occurred due to unvaccinated children being brought to crowded public places like Disneyworld.

We Don’t Have All The Facts Yet

While the link between autism and antidepressants may seem startling, it’s crucial that expecting mothers remember that this is simply one study. Plus, the risk of autism was found to be 1.87% in mothers taking antidepressants, versus a 1% risk amongst mothers not taking the drug. Thus, while there is, in fact, an increased risk, the increase is hardly staggering.

Ultimately, there will need to be many more studies done before we can truly determine whether or not antidepressants and SSRIs are putting expectant mothers at a serious risk for giving birth to autistic children.

What This Means For Expecting Moms

The best thing that any expecting mother can do is to talk to her doctor. If you’re concerned about your antidepressant use, talk to your doctor about alternative depression therapies that don’t involve prescription drug use. Your doctor will be able to determine if you are a suitable candidate for holistic and non-drug therapy.

We don’t have all of the data yet on whether or not antidepressant use can conclusively be linked to rising autism rates. However, the data from this study is promising. Not only might it finally lead to our autism rates dropping, but it could just put to rest anti-vaccine hysteria once and for all.