PositiveMed The Positive Side of Medicine
Home Yoga How He Changed His Life With 60 Days Of Yoga: The Feelings, The Science, The “Om” 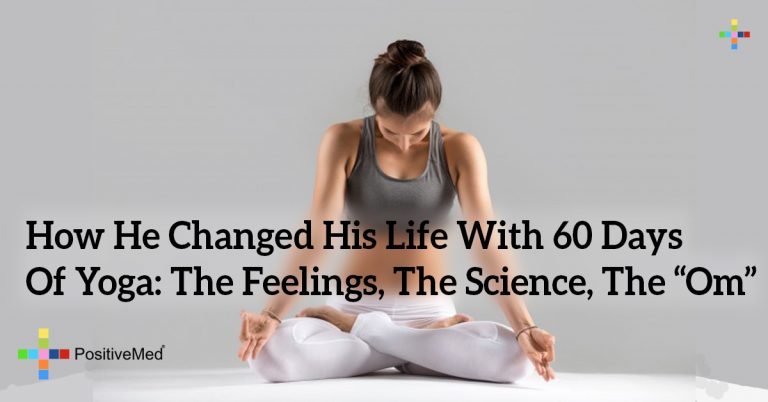 How He Changed His Life With 60 Days Of Yoga: The Feelings, The Science, The “Om”

Geoff Teehan was a regular, pretty athletic kind of guy. By his own admission, this middle-aged product design director had a bit of a belly, but he’d always been good at sports, and under the demands of his job and personal life, he let his self-care habits slide. Life is busy, and it’s easy to procrastinate- especially when it comes to working out, which Teehan never really had to think about. Sleeping minimally, floating through life, he’d stopped seeing the best and making the best of the world. That was until the day he decided to make a change.

As scientists have determined, it takes about eight weeks, or sixty days, to form a new health habit. Teehan took that statistic to heart after the realization that he had somehow become disconnected from himself and his most meaningful relationships. Beset by anxiety, he realized that he was missing out on his own potential. Teehan doesn’t say exactly what brought him to yoga, but he certainly has a lot to say about the impact it’s had on his life. After sixty days, he’s keen, engaged, energetic, and a whole lot more toned!

Whatever his rationale, Teehan made a smart choice in selecting yoga as the means to a new, deeper connection to himself. According to a recent study on the impacts of yoga on anxiety, participation in two month yoga class (eight weeks, sixty days) can significantly reduce anxiety, especially among women with anxiety disorders. Numerous other studies have shown that yoga can significantly reduce lower pain, depression, and even bowel disorders.

A less-studied aspect of yoga’s benefits is one reported by Teehan himself: “I made an effort,” he says of his 5 a.m. yoga classes and commitment to practicing yoga even when he was traveling. By seeking out that feeling of refreshment, calm, and connection to himself and his body, Teehan found himself committed to himself in a whole new way. He began to cook for himself every night, just because he felt like it. He cut out alcohol entirely and cut down on caffeine because they interfered with his newfound capacity for deep, restorative sleep.

By committing himself this way, Teehan found himself more inclined to look closely, think deeply, and keep his word. His commitments became more sincere and personal: he reports feeling as though he is now more engaged, every moment of every day. With his newfound confidence and the benefits and stability that came with his yoga practice, the new Geoff Teehan, as he thinks of himself, has never felt so alive. He’s never been quite so hungry to do amazing things.

Teehan’s journey was deeply personal, but the basic concepts behind what made it worthwhile are, according to science, available to anyone. Would you try a two-month yoga challenge? What do you think it could change in your life?