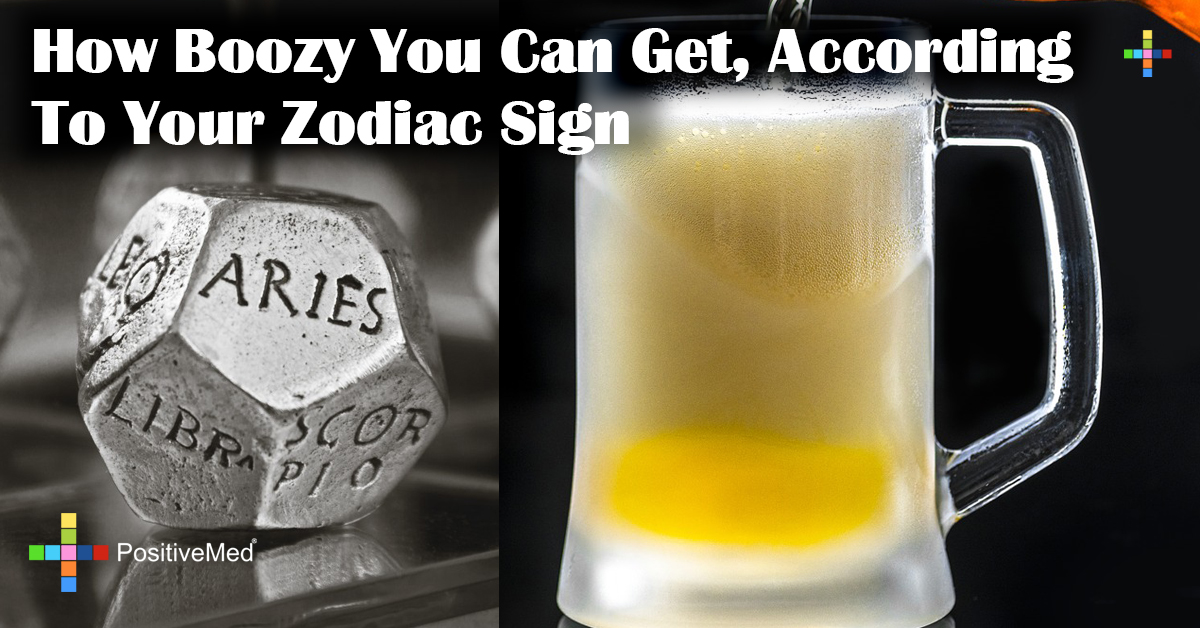 How Boozy You Can Get, According To Your Zodiac Sign

Horoscopes are something of a guilty pleasure for me. They’re like a sugary snack before I read the actual news. According to an article on Huffington Post, the season of birth can affect everything from eating habits to mental disorders. So hey, maybe there is more validity to cheesy horoscopes than you might think. What kind of drunk are you? We’re going to answer that question. I’m not shooting for scientific accuracy, but it’ll be curiously accurate, fun, and definitely sugary.

Aries have a gregarious nature that carries over into their drunken state. They start subtle and as the drinks start to flow they become more enthusiastic. The downside to the Aries drunk is that they have a tendency to become more aggressive the more they drink. Aries does not pull punches.

Taurus is a grounded earth sign, stubborn and immovable, but definitely serene. The Taurus drunk is a magnificent conversationalist. The stumbling drunk emerges the more the Taurus drinks. When it’s time to leave the bar the stubbornness of the Taurus drunk truly emerges.

Gemini is called the twins because there are two (or more) drunks living in their heads. Multiple personalities can be one of the best things to happen to a night of good old fashioned partying because you never know what to expect. The downside is that you never know what you’re going to get with the Gemini drunk.

Leo is the center of attention. The Leo drunk will happily allow you to bask in the accolades afforded by their company. The Leo drunk just can’t hold their liquor as well as some of the other signs. You can never tell the Leo drunk they’ve had enough, they won’t believe you.

RELATED ARTICLE: What You Should Be Eating, According To Your Zodiac Sign

You will never know the Virgo is drunk. They might be a little more conversational, but not really. They might slur a little and maybe they’ll make an off-hand comment that will be construed as an insult. Don’t worry, though, you won’t know if the Virgo drunk had a good time or not until they post it on Facebook.

Libra can diffuse drunken quarrels like a champ. The Libra drunk is the picture of restraint until they’ve tipped a few back. It’s fun for a bit, but then it’s like watching a slow motion train wreck.

The Scorpio drunk is not into moderation, they are either drinking, or they’re not. If they’re drinking, like drinking drinking, watch out. You won’t know they’re drunk until they’ve got some secret out of you that they can use later.

The Sagittarius drunk is like a ticking time bomb of truth. They can not hold their tongue once intoxicated.

Capricorn is classy if a bit hot and cold depending on the environment. The Capricorn drunk never admits to being drunk, it would be undignified.

The phrase mercurial comes to mind when describing the Aquarius drunk. They are usually quiet, even wallflowers, but they can turn on a dime and become a terror very quickly. Mostly though they’re quietly judging everyone.

Pisces is emotional and when they start out they are very “go with the flow.” The dark side of the Pisces drunk is that they can very easily become the blackout puking drunk they knew was lurking inside like the Incredible Hulk of drunkards.

Horoscopes are fun and often the writers of such columns will have different takes on what kind of drunk your astrological sign makes you out to be. Here is one from India Times and another from Buzzfeed. Compare, contrast and please drink responsibly.