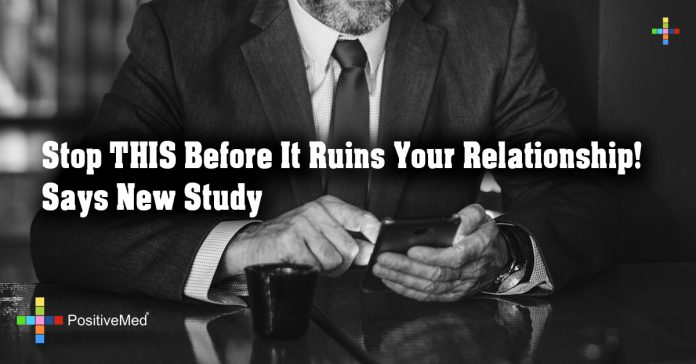 Stop THIS Before It Ruins Your Relationship! Says New Study

There are a lot of things that are guaranteed killers of relationships. There are, of course, the obvious ones like cheating and lying. But a new study says that the biggest potential killer of your relationship could be a new trend called “phubbing.”What is phubbing? Phubbing is the term used to refer to people who ignore the people around them because they are too absorbed in their phone screen. It’s a portmanteau of “phone” and “snubbing.”

On an episode of Keeping Up With The Kardashians, Kim Kardashian was famously admonished by her sisters for ignoring them and instead being glued to her phone. We know that Kim’s cell phone addiction – she’s admitted to being a total “Tweet-aholic” annoys her sisters.

In a recent study from Baylor University, researchers found that chronic cell phone usage could not only lead to higher levels of depression but could actually create friction in our romantic lives.

“They can undermine the bedrock of our happiness – our relationships with our romantic partners,” the researchers said. The study found that people who spent the bulk of their time glued to their phones were more likely to report being unhappy in their personal lives.

RELATED ARTICLE: The Secret of How to Get an Unromantic Man to Unleash His Inner Don Quixote

Social Media Could Change Our Personalities

Being glued to your cell phone doesn’t just hurt your relationship because your partner feels ignored. In fact, being a chronic social media user can actually fundamentally change your personality.

Nicholas David Bowman, a PhD at West Virginia University, has postulated that those who engage in negative behaviors on their social media accounts, such as leaving “hater” comments or engaging in online bullying, might see their online personalities start to become their offline personalities.

“Negative online behavior has largely the same antecedents and behavioral, emotional, and affective consequences as does an offline behavior,” Bowman says.

RELATED ARTICLE:  Would You Unfriend Your Spouse On Facebook To Save The Marriage ?

Is It Time For Us To Wake Up?

We’re quickly moving into a world where many of us have more of a significant social life online than we do offline. Could our addiction to our online interactions and phones end up destroying romantic partnerships en masse? It might be time to make a concerted effort to unplug, put our phones down and focus on the people sitting across from us.

Let us know in the comments if you’re ready to pull back from your phone life and start focusing on your real life – or text your friend about this article while you’re at dinner with your significant other ?