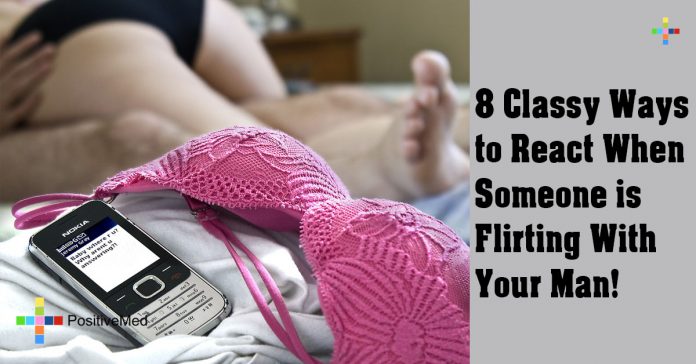 8 Classy Ways to React When Someone is Flirting With Your Man!

Analyze the Situation
Make sure you aren’t mistaking friendliness for flirtiness. People have a way of interpreting things differently. Before you make an issue out of something, make sure the woman is indeed flirting, not simply being nice.

Find Out Who is at Fault
Watch the interaction between your boyfriend and the offending female flirter. It’s easy to assume it’s the female’s fault. But if your boyfriend is encouraging her, or flirting back, he is just as at fault, if not more so, than her. If he is at fault, don’t confront her; deal with him instead. If he is not reciprocating her flirting, then you can take issue with her.

Give the Woman an Evil Look
If you are positive the woman is flirting with your boyfriend, shoot her an evil look. This may be enough for her to get the hint and back off.

Subtly Show the Woman This is Your Boyfriend
Sometimes it may not be obvious that you are your boyfriend’s girlfriend. The other woman may think you two are friends. If she doesn’t pick up on the evil look you gave her, subtly stake your territory by holding his hand, stroking his arm or putting your arm around him. Hopefully she will get the hint.

Jokingly Tell the Woman You Don’t Like People Flirting With Your Man
If you have made it clear to the woman that the man she is flirting with is yours, it may be time to get a bit more assertive. Consider jokingly making a statement about how you don’t like women flirting with your man. This shows her you are assertive enough to stand your ground, but still keeps the situation non-confrontational.

RELATED ARTICLE: 5 Ways You’re Being Unfaithful to Your Partner Without Even Realizing It

Pull the Woman Aside and Ask Her to Refrain From Being Disrespectful to You
If, despite your best efforts to avoid confrontation, the woman is still flirting with your boyfriend in front of you, it may be time to simply pull her aside and calmly explain that she is being disrespectful to you. This calls her attention to the issue and lets her know you won’t tolerate it.

Walk Away From the Situation, With Your Boyfriend
If you are worried that something may be going on, simply walk over to your boyfriend, place your hand on his shoulder or around him to show the woman he is yours and let him know that you are ready to leave. Walking away helps avoid confrontation.

Calmly Explain to Your Boyfriend Why it Hurts You
Let your boyfriend know that you are concerned and feel that something more is going on. Seek out that extra reassurance for yourself and comfort from him. This lets him know that you are not ok with the situation and it is up to him to correct it. If he is unwilling to, it may show that you aren’t as important to him as you thought you were. But a good boyfriends will take your feelings into account and correct their hurtful behavior.