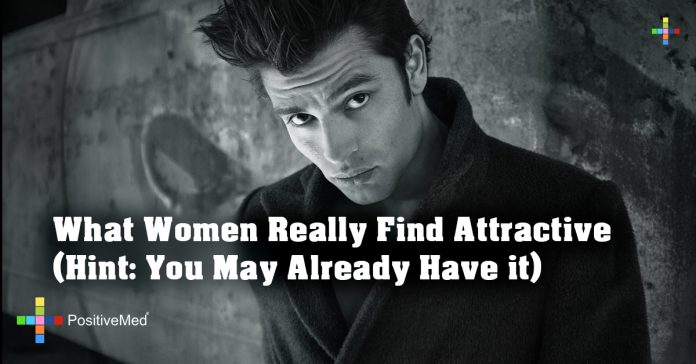 What Women Really Find Attractive (Hint: You May Already Have it)

If you could be a fly on the wall in a coed’s dorm room, a women’s gym or a bridal shower, you might feel yourself blush a little in anticipation when the conversation turns to the traits that women find attractive. After all, this is the part where the talk gets a little spicy, right? Actually, you might be surprised to hear what women find attractive. One of the key components of attraction for women has nothing at all to do with a man’s physical attributes. That’s because while women rank physical attractiveness as being fairly important initially, once you get past the first few minutes of conversation it’s the confidence a man possesses that keeps women interested.

This shouldn’t really be such a surprise. How many times have you seen a gorgeous woman with an average-looking guy? It happens more often than the hair replacement and bodybuilding supplement commercials want you to believe. Chances are, though, that if you have a chance to get to know that average-looking guy you will find he is not so ordinary. The difference may be hard to pinpoint, but there’s a good chance it’s confidence.Researchers have known for years that confident people are more successful. It’s also been clear for years that confidence ranks right behind physical attractiveness as a turn-on for both men and women. The key to being attractive, then, must be to begin acting as though you think you are an amazing person, correct? The truth isn’t quite that simple. Lots of people come across as confident in at least some aspect of their lives without making anyone’s heart throb.

It turns out that the man who is confident that he is a great catch isn’t as hot as he imagines he is. Ironically, the most appealing man is one who is so confident in his own ability to function in the world that he doesn’t seem to notice or even care whether anyone finds him attractive.

As opposed to the arrogant cock of the walk who thinks he’s a real head-turner, a man who possesses this special kind of confidence is so at-ease with himself that he doesn’t need to be approved of by anyone. That sort of naturalness and lack of pretense strikes a deep chord in women and creates a powerful physical attraction.

That’s all fine, you may say, but what if you weren’t born with that kind of confidence? That doesn’t mean you can’t develop some for yourself. You already took the first step early in this article when you realized that your looks don’t rule you in or out as a potential romantic partner. You can keep going by focusing on your strengths and building on them to create the life you really want. Finally, accept the fact that life is not a contest judged by women and won by the most perfect example of manhood. It’s actually an opportunity for you to develop yourself and to achieve your own potential. Along the way, don’t be surprised if you notice women leaving the judge’s table to come find out more about you.

Does it pay to be smart, attractive, or confident (or all three)? Relationships among general mental ability, physical attractiveness, core self-evaluations, and income. TA Judge, C Hurst, LS Simon – The Journal of applied psychology, 2009 – pubmed.cn