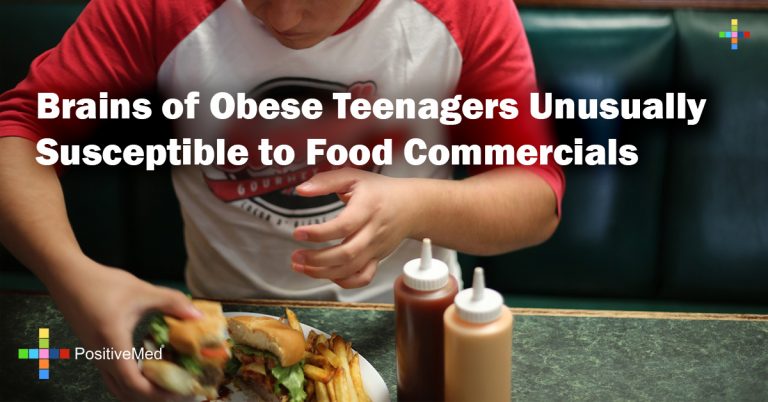 Keep overweight adolescents away from food commercials or they may face difficulty losing weight. Sounds a bit weird, right? Unfortunately a Dartmouth study reveals that TV food commercials disproportionately stimulate the brains of obese teenagers, including parts of the brain known to control taste, pleasure, and the mouth, suggesting they mentally stimulate unhealthy eating habits that make it hard for them to lose weight later in life.

According to the study your dieting efforts should not only be targeting the initial temptation to eat a tasty but unhealthy food, but also subsequent thoughts of actually eating it. In other words, you should imagine yourself eating a healthy salad instead of a pizza or burger.

Researchers from Dartmouth College’s Department of Psychological and Brain Sciences, the Norris Cotton Cancer Center at the Dartmouth-Hitchcock Medical Center, and Geisel School of Medicine at Dartmouth were involved in the study, which was published in the journal Cerebral Cortex.

The connection of food commercials to obesity in teenagers has increased drastically over the past 30 years, and the research has linked the quantum of TV shows viewed in childhood with a higher risk for obesity. There is evidence that supports the fact that exposure to food marketing increases eating habits linked to obesity.

The researchers used magnetic resonance imaging to observe the responses of brains in obese and in healthy weight adolescents aged 12-16 to 2 dozen fast-food commercials and to non-food commercials. The commercials were shown during an age-appropriate, TV show, “The Big Bang Theory,” so that the subjects didn’t know the purpose of the study.

The results of the study were surprising, it was observed that the areas of the brain involved in attention, focus, and in processing rewards, were more active while viewing food commercials than non-food ones. The overweight teens also showed more reward-related activity than healthier weight teens in the orbitofrontal cortex and in regions associated with taste perception. The most interesting finding was that food commercials also activated a region in the brain of overweight adolescents that controls their mouth. This particular region is a part of large sensory system which is vital for observational learning.

Lead author Kristina Rapuano, a graduate student in Dartmouth’s Brain Imaging Lab, says, “This finding suggests the intriguing possibility that overweight adolescents mentally simulate eating while watching food commercials.” She adds, “These brain responses may demonstrate one factor whereby unhealthy eating behaviors become reinforced and turned into habits that potentially hamper a person’s ability to lose weight later in life.”
Although there have been many studies that show the heightened brain reward responses to viewing tempting food in general, this Dartmouth study is the first study to expand the relationship to real world food cues such as TV advertisements of Burger Kind or McDonald’s that are adolescent favorites. The brain’s reward circuitry involves the release of dopamine and some neurotransmitter chemicals that provide pleasure and may result in addictive behavior.

On average, adolescents watch 13 commercials each day, so it is not surprising that they show a strong reward response to food commercials, but the new results that show heightened reward responses coupled with bodily movements that indicate simulated eating provide a clue into a potential mechanism of how unhealthy eating habits are developed over time.

The aforementioned study is, unfortunately, only the tip of the iceberg when it comes to obesity research. There is a plethora of information related to the external factors and stimuli associated with obesity. Those who pursue a career or education in social work often learn a great deal about the outside factors that cause obesity in order to improve the health of their clients. Obesity is a widespread condition that affects millions of people, but researchers are working hard to reduce those numbers in the future, and to ensure that current cases are properly treated.