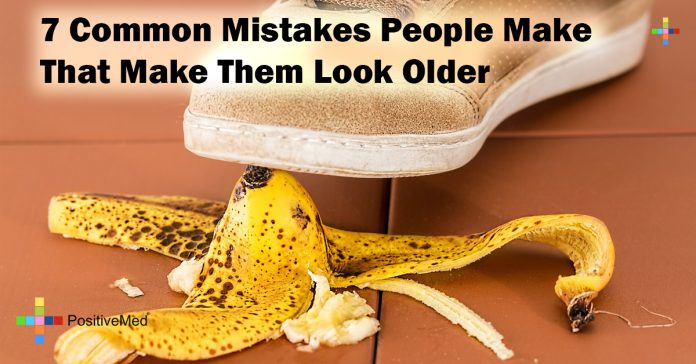 Smoking cigarettes, excessive consumption of alcohol, and overexposure to the sun without SPF protection are things that have become common knowledge as behaviors to avoid in order to decrease the appearance of aging. However, there are many mistakes that people can make unwittingly that lead to an older appearance and are lesser known as health hazards. Below are seven common mistakes that people make that make them look older.

Some of the ingredients in common personal care products pose threat to youthfulness, including the blockage of essential hormones like estrogen. According to a study by UC Berkley researchers, minority women and teens were shown to have a higher level of endocrine receptors which blocked the normal effects of hormones such as estrogen due to the types of makeup they used. The use of these products proved particularly detrimental to younger women, as they were at the height of physical and biological development.

If you suddenly notice an urge to take a giant gulp of water, you’re already dehydrated. Many people wait until they feel “thirsty” to hydrate themselves, without realizing that using that indicator has already led them to unhealthy territory. According to the American College of Sports Medicine, failing to consistently remain hydrated can lead to a litany of health issues which increase the appearance of aging.

Hollywood’s elite are known for their super-slim frames and ladder-like abdomens. However, dieting, cleanses and excessive dedication to the gym can actually make you appear older. Neuroscientists at NYU Langone Medical Center cited that restricted calorie diets can actually modify genes in a way that increases aging.

A study published in the Federation of American Societies for Experimental Biology Journal showed that the ingestion of sodas and processed foods can increase aging and also the risk of diseases that contribute to an acceleration of the aging process.

Dr. Mark Tarnopolsky was astonished when results of an experiment showed that premature graying of hairs was negated when mice exercised regularly. A lack of exercise can lead to premature aging and increase symptoms that are a prerequisite for various diseases that increase the appearance of aging. Conversely, regular exercise increases blood flow, prevents disease and contributes to a youthful appearance.

Chronic stress can have effects that surpass our mental health. The National Institute on Aging lays out the link between premature aging and stress in plain language. Our body uses energy through a process known as metabolism, which involves all the chemical reactions needed to maintain a living organism. Stress causes an extreme output of energy, which forces our metabolism to kick into overdrive and, thus, can lead to an increase in aging.

Sleep is a time that allows the cells of our body to work without interruption in repairing the damages that come from day to day life and environmental exposures. To avoid the appearance of aging, get at least eight hours of sleep a night.