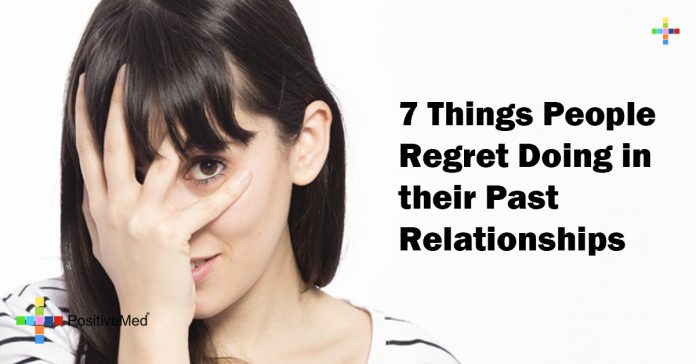 7 Things People Regret Doing in their Past Relationships

Regrets in Past Relationships

Depending on the longevity of the relationship, there are seven things people regret doing in their past relationships.

Lying is the first misstep in a faulty relationship. People lie by degree. Lies may begin with “little white lies” as an accepted indulgence. Eventually, the degree of lying takes on a more damaging, regrettable effect on relationships.

Deception
Deception has many faces in relationships. It may rely on a partner’s predictability that affords a certain amount of deception. This occurs when one or both parties in a relationship create a facade to hide other ongoing relationships; for example, entering into marriage while committing bigamy. This is most regrettable for the deceiver and partners being deceived.

Omitting Important Personal Facts
Often, relationships are based on one or both of the individuals omitting important personal facts. Sometimes, this can be serious. For example, a partner may omit important personal facts like having contracted STDs. They may regret having omitted this information if the relationship becomes intimate. It should be discussed at the outset to avoid passing disease to a partner.

Betrayal of Trust
Of the seven things people regret doing in their past relationships, betrayal of trust may be the most regrettable. Once trust is destroyed between two individuals, it is nearly impossible to restore and destroys relationships. Regrets occur for both parties. The betrayer realizes too late their loss of personal integrity, honor and credibility and regrets their actions. The betrayed regrets trusting the partner they can no longer trust.

Betrayal of Confidence
Betraying a confidence causes regrets if the confidence betrayed causes loss of a job, creates a scandal or in any way damages a person’s public image or their reputation. Regret occurs for both parties. The betrayer regrets the damage they’ve caused and loses a personal friend or family member’s faith in them. The betrayed will never again share a confidence with the betrayer and regrets ever having friendship with such a person.

Committing Adultery
After financial disagreements, the leading cause of divorce in the US is adultery. This particular relationship issue often incorporates lying, deception and betrayal of trust. Although, there are other reasons for divorce, i.e., drug addiction, alcoholism and gambling, adultery is an open admission of failure to maintain a stable, long term commitment to marriage vows. Regrets in dysfunctional relationships that end in divorce exist for both partners.

Hiding Financial Facts
Many times, partners in relationships are not always truthful about financial difficulties or their financial status. The regrets with this issue are borne of fear of being exposed as financially inadequate.