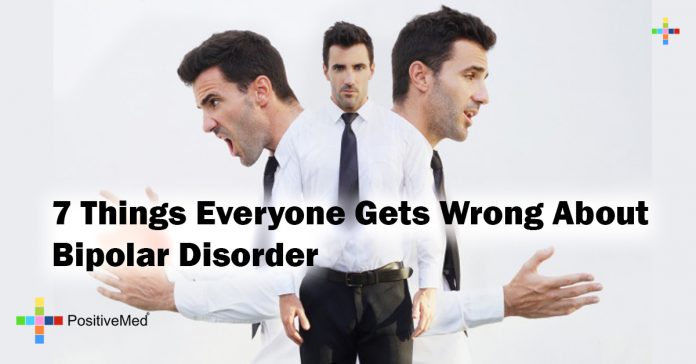 Formerly called manic depression, bipolar disorder is a mental illness where the sufferer goes through periods of elevated mood followed by periods of dark depression. This disorder affect 5.5 million adult Americans, or 2.6% of the population, yet it’s widely misunderstood. Here are seven of the most common misconceptions.

Poor decision-making is a common hallmark, but not everyone with bipolar disorder experiences it. It’s quite easy to dismiss a person with the disorder as incapable of making decisions or incompetent. In reality, plenty of sufferers live full and rewarding lives with successful careers, such as award-winning novelist and actress Carrie Fisher.

6. There is no effective treatment for bipolar disorder.

Over 40% of those diagnosed with this disorder can expect a full recovery. A combination of talk therapy, medication and support from others can help sufferers learn to identify their symptoms and take appropriate action. For those who do not recover fully, the condition can be managed so well that it makes little impact on the person’s daily life.

On the contrary, some very productive people have been diagnosed with bipolar! Irish songstress Sinead O’Connor has put out eleven solo albums, won multiple Grammy awards and collaborated with many other artists in music. Vincent Van Gogh, famed painter, was also believed to be bipolar and yet created some of the most well-known art in the world. Over 75% of those who are bipolar are able to work.

While some sufferers do have extreme periods of mania where their behavior may get out of control, ‘crazy’ actions are certainly not the norm. If there is no psychosis or schizophrenia present, a person with bipolar is no more ‘crazy’ than the average person.

3. You can become bipolar by drinking too much or using drugs, especially hallucinogens.

This is a case of correlation not equaling causation. People with bipolar disorder are more likely to abuse drugs and alcohol in an attempt to self-medicate, but there is no evidence that these actions cause bipolar.

2. Children can’t be diagnosed as bipolar.

Children as young as six have been diagnosed, and it’s more common among kids who have a parent who is bipolar. It is sometimes more difficult to diagnose a child, as bipolar children often cycle from mania to depression much faster than an adult. Children can cycle several times a day, while an adult’s periods of mania and depression can last weeks, months or even years.

Bipolar is not a disease that can be seen with an x-ray or MRI, but it also isn’t something the person can choose to ‘snap out’ of, either. Those with bipolar disorder need treatment and understanding, not accusations of mental weakness or ridicule.