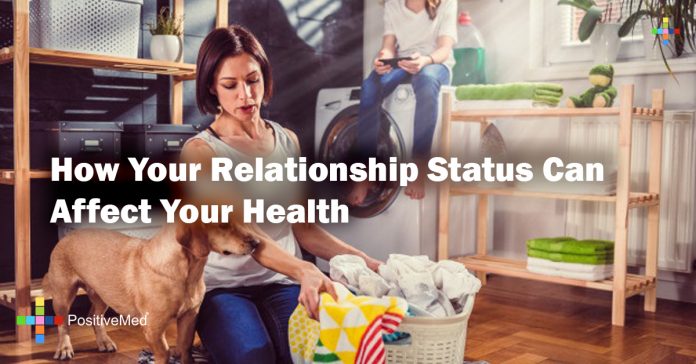 How Your Relationship Status Can Affect Your Health

According to research in 2012, people tend to put on weight when they are in a healthy marriage and lose weight when their marriage ends. The reason for the loss could be stress, and gain could be the fact that you’re comfortable. Couples who exercise and eat healthy together are more likely to stick to a healthy plan.

We often hear about heartbreak, well your heart is actually affected when you don’t get needed support from your partner. A recent study conducted on 136 married couples showed that those in an unhealthy marriage are more likely to have higher levels of coronary artery calcification.

If your relationship status is ‘madly in love,’ it will improve your health by releasing feel-good hormones. A 2004 study at the University of North Carolina on 34 couples showed that both men and women in good relationships had higher levels of oxytocin, a hormone released after hugging.

For women a healthy marital status is a sign of healthy bones as proved by a recent study. It is unclear if happily married women take better care of themselves or if it is for another reason.

Regular love contact and physical contact is linked to reduced stress. A 2009 study published in the Journal of $e*[email protected] Medicine discovered that those who engaged regularly in love-making activities were mentally healthier and happier, they reported more satisfaction and signs of improved health.

Married women drink more alcohol than spinsters and divorced women according to a 2012 study, often because they have a drinking partner in their husband. Conversely married men drink less than single ones.

Research shows insecurity in a relationship or frequent disputes is linked to poor sleep and/or insomnia. Insomnia can also affect your partner’s health. A 2005 poll showed that people are more likely to feel daytime fatigue if their partner is an insomniac.

Healthy marriages have been linked to a better survival rate from cancer of the lungs, prostate, and colon. A 2009 study found that of 3.8 million cancer patients 58% of married people lived 10 years post diagnosis, compared to 52% of those who never married, 46% of divorcees, and 41% of widows and widowers. The worst prognosis was of those separated from their spouse with only 37%.

A 2013 study showed that the happier a woman is in her marriage, the better physical shape she is in. A good relationship boosts your confidence and your desire to stay healthy.