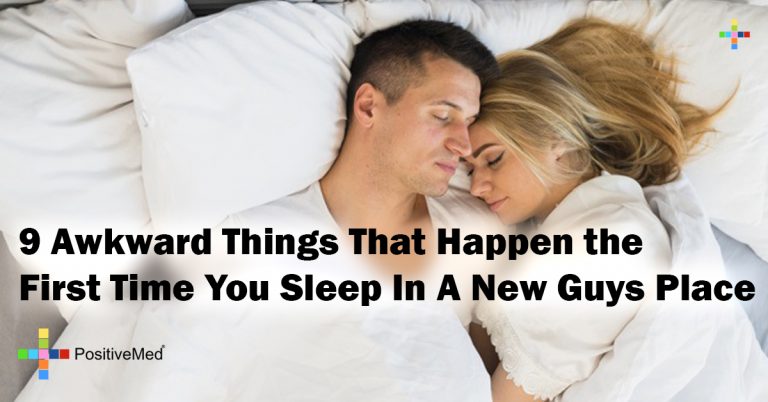 Staying over a guy’s place for the first time can be an exciting an enlightening experience. This first step towards potential cohabitation can present a number of challenges. However, relationship therapist Barton Goldsmith Ph.D stresses the importance of sleeping together for couples. His studies have concluded that trust, communication and other relationship attributes are improved merely by the act of two individuals sleeping near each other.

The following list includes only a few examples of the hilarious and awkward things that might occur during your first night staying over with your new man, along with tips to keep something slightly embarrassing from becoming a full blown “Oh My God” moment.

Bringing up condoms is one of those things that shouldn’t be awkward, but inevitably is. With all manner of nasty STDs out there, it’s best to proceed with caution when encountering unfamiliar junk. Just power through it and get it over with. Allowing the awkwardness to linger just takes time away from having fun!

Meeting a potential love interest’s friends is always stressful, but it can be even more challenging to meet your guy’s roommates. Best case scenario involves them silently judging you and possibly comparing you to previous liaisons. In the worst case, they’ll be a complete weirdo who you just know is going to be listening at the bedroom door the second you close it. In either case, you’d be wise to try and befriend your beau’s roomies as best you can. You never know how much he discusses relationship stuff with his friends, and a bad impression could be disastrous for a burgeoning relationship.

Even though you absolutely were not snooping, it’s possible that you accidentally-on-purpose discovered your man’s secret stash. In most cases, it wouldn’t be a big deal unless it’s something really out there. Don’t go looking for what you don’t want to find and if you do, well it’s possible that he won’t want to actually try anything really weird until you’re both in a more secure place in the relationship (hopefully).

A half-empty bottle of perfume, an errant pair of panties, or a bottle of Midol in the medicine cabinet: These are all the tell-tale signs of either a recently departed Ex, or a serious conversation that you need to have with your guy. Try not to get too flustered by the sight of another woman’s stuff cluttering up your new territory. It’s more than likely that your guy (like most guys) just isn’t that fastidious with his household upkeep.

Everyone pretty much does the same things behind bathroom doors, yet for some reason the simple act of relieving yourself can be especially awkward when you’re around a new love interest. If it’s a genuine concern, it might be wise to stick to foods you recognize in order to minimize the element of surprise when it’s time to go. Otherwise just relax and recognize that if this guy is the type to complain about a lady “communing with nature”, that your time might be better spent with someone else.

6. Forgetting to bring along the essentials

Though you would usually plan ahead for sleeping over, sometimes in the heat of the moment (and when his place is closer) you throw caution to the wind in favor of getting’ some. If you end up at Mr. Right’s place having brought nothing with you but a smile, there’s no shame in asking about a spare toothbrush or a T-shirt to sleep in. If he really wants you there, no reasonable request should be too much to ask.

7. He Has No Ability to Clean Whatsoever

Though seemingly unlikely, it is entirely possible for a guy to look the picture of well-groomed gentlemanliness on every date and still keep an untidy home reminiscent of someplace Sasquatch might live. If you’re not too particular about cleanliness, it’s best to just assume he’s had a busy week. Just remember that messy and filthy are two different things. One is forgivable, the other is a definite red-flag.

8. His Snoring Could Literally Wake the Dead

A light grumble can sometimes be relaxing in the wee hours of the morning. But a guy whose snores sound like heavy machinery being demolished by even heavier machinery can be an absolute nightmare. To make matters worse, a lot of snorers don’t even realize how bad it is. If the guy is worth it, you might get used to it eventually. There are all sorts of advances being made every day in earplug technology.

9. The Terrible, Horrible, No Good, Very Bad Realization that “His” Place is Actually His Mom’s place.

Just turn around and walk away, girl. Nobody has time for that.