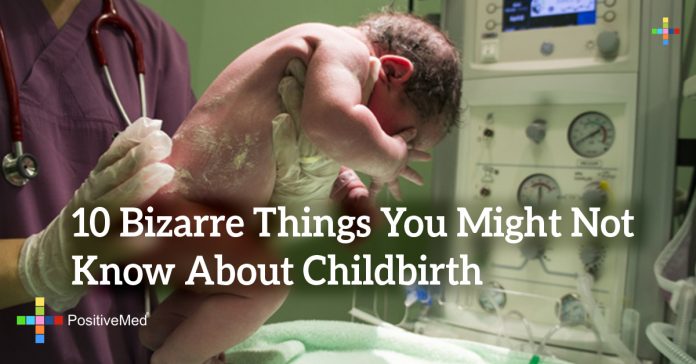 Having babies is the most natural thing in the world, but if you start to think about it, it’s also pretty weird. The entire process, from conception to birth, can sound like something out of a sci-fi movie. There are also equally strange traditions and practices surrounding childbirth, as well as a host of unusual occurrences. Here are 10 bizarre things nobody knew about childbirth.

The only pleasurable experience most people associate with childbirth is finally having the baby out. However, some women beg to differ. It’s a rare, but not unheard of, phenomenon for a woman to have a satisfaction during childbirth. This is called “[email protected] birth,” and affects roughly 0.3 percent of women, typically during natural birth.

In some areas of the world, women were historically encouraged to consume alcohol during labor. Most doctors would frown on this practice today, but it makes sense, birth is often long and painful. Before the miracle of modern anesthesia, the analgesic and relaxant effects of alcohol would have likely been a welcome reprieve.

Nobody understood the role of pathogens in disease until the 1900s. Before this, it was common practice for doctors to deliver babies, one after the other, without washing their hands in between. Unsurprisingly, this frequently resulted in fatal infections of both mothers and babies.

4. Last Will and Testament

Giving birth has risks, but before hospitals, medical equipment, and modern sanitation, it used to be much more dangerous. The odds of dying in childbirth were far higher than they are now. For this reason, it used to be common for women to write out their will when they learned they were pregnant.

While the idea of an episiotomy is enough to make any woman cringe, just imagine if you were one of the unfortunate women of the eighteenth century. Back then, if the baby wouldn’t come out on its own, doctors performed a procedure known as a symphysiotomy, in which cartilage was removed from the pelvis to allow the baby to pass through. Their tool of choice for this was the prototype for today’s chainsaws, invented by two Scottish doctors, John Aitken and James Jeffray.

If you think contractions stop once the baby is delivered, think again. Most women experience milder contractions for several days following birth. This is thought to help the uterus return to a smaller size.

7. Pain as a Requirement

When anesthesia was first developed in the early twentieth century, the obstetrics board forbade them from being used during childbirth. Their defense for this atrocity was that women were Biblically ordained to suffer pain when having babies.

Laying on your back to have your baby is actually a recent practice. Not long ago, it was normal to give birth in a standing or squatting position. Interestingly, this position is considered more natural and is believed to make pushing easier and more effective.

Most cultures traditionally had a midwife catch the baby when it came out, but Native American tribes had other ideas. Laboring mothers, who gave birth standing up or squatting, allowed the baby to land on a pile of leaves on the ground.

In some rural locations, it was a long-held tradition to bake a cake while the mother was in labor. The delicious aroma wafting from the oven was thought to calm her and reduce her discomfort. Other sources suggest that the so-called “groaning cake” was rich in nutrients and spices that aided postpartum healing.