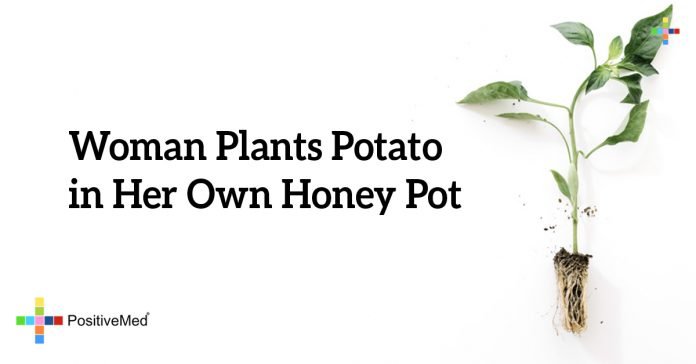 Woman Plants Potato in Her Own Honey Pot

We’ve all been there before…things are getting hot and heavy and then our significant other asks that eternal question.

No? Well, maybe that’s because you, like most of the world’s population, know that potatoes have nothing to do with contraception. Unfortunately, one 22-year-old Colombian woman cannot say the same.

It all took root (pun intended!) in the town of Honda. The woman went to her local hospital, desperately ill and hoping to cure her extreme abdominal pain. None of the doctors could have ever prepared for what happened next.

Slowly, a story started to emerge from the embarrassed patient. Her mom had told her about this wonderful contraceptive method…putting a potato in her lady part! So she’d tried it. And she’d given it a real shot, leaving the potato in her lady bits for about two weeks. This proved to be enough time for the root vegetable to germinate inside her body, even planting roots. Obviously, human bodies are not made for spawning potatoes, so the woman started to have some violent reactions to her unplanned vegetable baby.

The pain in her lower body only grew more intense over the following days, and eventually she knew that it was time to check herself (and her new addition) into the hospital. When examining the 22-year-old, the attending nurse was completely shocked to see potato roots emerging from the patient’s body.

Luckily for the young woman, the talented team of doctors was able to remove the vegetable from her body without surgery. Doctors stated that she will make a full recovery and suffer no lasting effects from her ill-advised contraception experiment.

“But…how?” Most people are left scratching their heads at the thought of such a terrible life choice, but it turns out that there are some underlying factors that may have contributed to the woman’s poor decision.

First, Colombian society is not necessarily accepting of traditional birth control methods such as condoms or pills. Although sex ed became a requirement in the nineties, much of the general population has remained wary of what is taught in the classes. In fact, some even believed that sex ed teachers were using class time to encourage students to become gay. Furthermore, there is a pervasive culture in which some of the men express that wearing condoms does not make them feel “macho,” leaving contraception up to the woman.

Unfortunately, not all women have enough common sense to dismiss awful suggestions, hence the government’s recent campaigns to spread awareness about contraceptive methods. Aside from this potato incident, the country has experienced a massive surge in teenage pregnancy. With an older population that is suspicious of sex ed classes and a younger population that is afraid to bring up the topic of contraception with their parents, a perfect storm has combined to create an atmosphere of mistrust and embarrassment surrounding sex. We can only hope that the potato woman’s sad predicament will lead to new conversations about sexual health taking root.