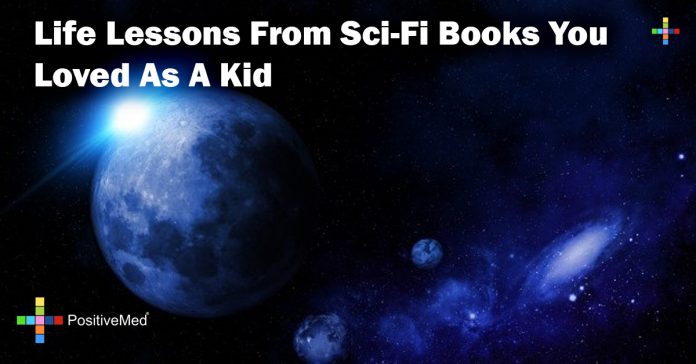 Life Lessons From Sci-Fi Books You Loved As A Kid

While science fiction might seem like an escape to the future, science fiction writers have used the possibilities of miraculous technologies, other worlds, and alien species to explore the human condition often through a child’s perspective. Lovers of science fiction can learn a lot about life from the many strange and wondrous worlds visited.

• Never work for an evil boss – In science fiction, like everywhere else, no one likes their boss; but in the future, the bad behavior of bosses is taken to another level. In the Star Wars series, Darth Vader kills two of his commanders for failing him, and his evil boss, the Emperor, tries to replace him with his own son. In the Aliens series, the corporation sets one of their own crews up to be hosts for the alien species in order to gather samples for their bioweapons department. In Outland, a law-enforcing sheriff learns too much about the company’s use of illegal drugs to improve worker productivity and mercenaries are sent to kill him. You might not like your boss, but at least you are still alive.

• Looks can be deceiving – From the noisy cricket in Men in Black to Yoda in the Star Wars series things are rarely what they seem in science fiction. In the Ringworld books, a seemingly timid race of herbivores (the Puppeteers) are subtly manipulating the known galaxy on a grand scale for their own protection. They use humanity to contain an aggressive cat species, selling them faster-than-light technology to give them an advantage in war. They also manipulate Earth population control laws to add a birthright lottery in an attempt to make humans lucky.

• You can be too good at video games – In Ender’s Game a group of kids believe they are training for war against an aggressive species through a series of increasingly real simulations. In the end, they learn they were controlling a real fleet remotely and their ultimate win, destroying the enemy’s planet, was genocide.

• Not everybody sees everything the same way – Some really memorable Sci-fi characters are aliens. While Spock and Chewbacca come to mind for most people, and ET was about how the poor little alien was just lost and alone like anyone else, books like Nor Crystal Tears and The Color of Distance put the alien experience front-and-center. Humans are seen as squishy, loud, incomprehensibly random and disconnected from themselves and the world around them. For those who enjoyed Avatar or who are fascinated by alien villains like Star Trek’s Borg, these books provide an immersive alien experience.

• The answer is 42 – The Hitchhiker’s Guide to the Galaxy provides the answer to the ultimate question of life, the universe, and everything. It does not get any more profound than that.

In today’s increasingly global world where books are reinvented through the internet, while specialized TV channels and fantastic movie special effects allow us to focus our experience even more toward the familiar and the expected, the alien experience shows that being different is natural.