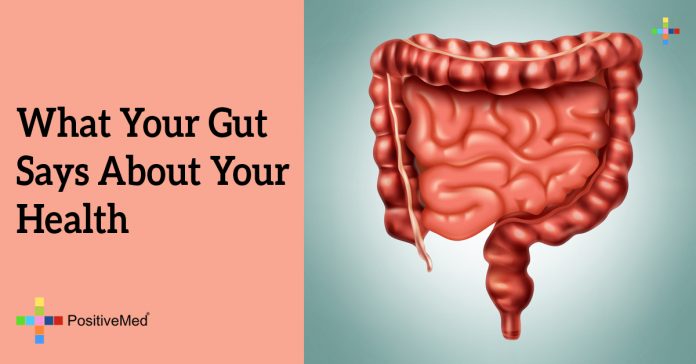 What Your Gut Says About Your Health

You Won’t Believe What Your Gut Could Be Telling You!

Each human body is filled with microbes (viruses, bacteria, and fungi). For every human cell our bodies possess, there are about ten of these cells. They live everywhere in and on the body and help it function by helping the body digest food and boost the immune system. They are collectively referred to as “microbiome” and are partly inherited from your mother at birth and the rest are determined by your environment and lifestyle.

Bacteria are the most common microbe in the intestines and thus are usually the focus of scientific study. Some researchers are studying whether specific bacteria can cause certain diseases and what, if anything, we could do to change that.

The stomach has a ‘mind’ of its own, the lining of the stomach has an independent network comprised of millions of neurons, even more than the spinal cord. It’s so complex that scientists call it “the second brain”. It’s in charge of the digestive process as well as being the core of the body’s immune system, fighting off foreign viruses and bacteria. Gastroenterologists say this barrier is as important as the skin when it comes to defending the body against illness.

The gut lining produces 95 percent of our bodies’ serotonin, the remaining five percent being produced by the brain where it regulates happiness and mood. Serotonin in the gut, however, has a wide range of functions; including alerting the immune system about germs and stimulating nerve-cell growth. Serotonin keeps the brain and the gut in constant contact, chemical messages from the central nervous system and the enteric nervous system exchange faster than thought. This is why when we’re experiencing a strong emotion our stomachs churn or feel fluttery. It’s a two-way street, however, so the enteric nervous system can bring you down emotionally if things are not alright in there.

Studies show that people who eat probiotic foods are healthier mentally and experience less digestive upset than those who do not. If you’re feeling bloated or just unhappy, try changing up your diet. Lose the processed foods, consume more water, and increase your fiber intake. Simple sugars and animal protein can contribute to disease and obesity as well as fuel harmful bacteria, so choose foods that have the fewest ingredients on their labels and increase prebiotics consumption (non-digestible ingredients found in bananas, vegetables such as tomatoes and onions, and whole grains) that help probiotics be more effective.

Try to avoid unnecessary help from laxatives, broad-spectrum antibiotics (like tetracycline), and NSAIDS (which are aspirin, naproxen, and ibuprofen) which clear out good bacteria as well as bad. If you’re on an antibiotic, you should consume a probiotic for twice as long as the antibiotic prescription to avoid diarrhea, stomach cramping, and nausea those medicines can cause.

Alcohol should also be used sparingly, even one drink a day can risk an overgrowth of bad bacteria and cause gastrointestinal distress. If you’re suffering from bloating, gas, diarrhea, or cramping and drink regularly, cut back a little and your symptoms should lessen

If you feel relatively healthy, you probably don’t need to add more probiotics to your life. However, if you have IBS (irritable bowel syndrome) you’ll want to ask your doctor which strain will help you the most.

In summation, if you are good to your gut, it will be good to you! Small changes that improve health can greatly improve your quality of life.