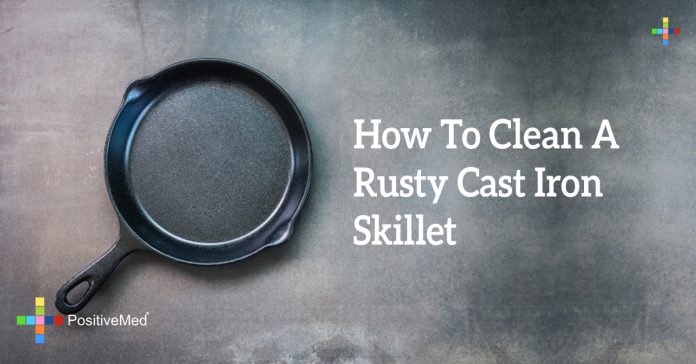 How To Clean A Rusty Cast Iron Skillet

Cast Iron Skillets are durable , affordable, and virtually nonstick. You can fry, sauté, cook eggs even bake bread and make pizzas in them!

When comparing nonstick (Teflon) and Cast Iron skillets; we find that both are very similar in many ways. They are both good for frying and both are sensitive to sharp instruments like forks and knives. You want to use wooden spoons or rubber spatulas when using both types of pans.

Cast Iron has several advantages to Teflon: first it’s cheaper than nonstick skillets. Second, it doesn’t have the health dangers attached to nonstick pans. Teflon is a brand name for a chemical called polytetrafluoroethylene (PTFE). Another chemical that is used in the process of making Teflon is Perfluorooctanoic acid (PFOA), which can cause several health problems such as severe hemorrhaging of the lungs. The condition is caused when inhaling the fumes and is known as ‘polymer fume fever’. the symptoms include shortness of breath, tightening of the chest, chills, cough, sore throat and fever. It may also cause cancer. PFOA is also linked to bladder and liver cancer.

Cast Iron pans are much heavier; it can go straight from the stove to the oven (they are extremely durable) and are very difficult to destroy. However, you must season a Cast Iron pan before using it or it will rust.

How To Season A Cast Iron Pan?

Seasoning a Cast Iron pan gives it a smooth, nonstick surface that actually improves with age. When you buy a new Cast Iron pan, the first thing you should do is wash it in hot, soapy water. Dry the pan thoroughly, first with a dishcloth, and then in an oven heated to 300 degrees for several minutes.
You must dry the pan completely to prevent rust.

Traditional Cast Iron skillets don’t come with a non stick surface. In this case you must start by seasoning, or coating the skillet with solid cooking oil and baking it in a 350 degree oven for an hour or two. Then allow it to cool down before removing it from the oven.

How To Clean A Cast Iron Skillet?

To keep a seasoned Cast Iron pan in good condition, simply wipe it with a paper towel and a little oil after each use to clean it. If there are stuck-on food particles, use hot water and a brush to clean them away (never use soap). If necessary, pour some water into the pan, and boil it on top of the stove for a few minutes to eliminate stubborn food pieces. Dry and preseason the pan between washings.

How To Restore and Clean A Rusty Cast Iron Skillet

What you will need is one regular potato and 2 tablespoons of salt.
Cut the potato in half; using the flat side of the potato, scrub the salt into the surface of the pan. The moisture form the potato, combined with the Salt, helps remove all of the rust form the pan.

Thoroughly rinse and your skillet will be good as new!